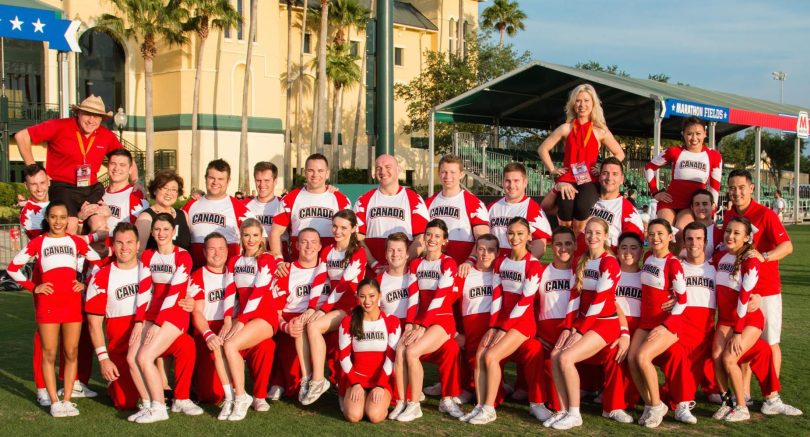 ‘Coach Trace’ (far left, with hat), David-Lee Tracey, has guided the Western Mustangs’ cheerleading program for the last four decades, creating a dynasty along the way – including an impressive 34 National Co-ed team titles in 35 years.

He’s spent 40 years at the helm of Western University’s cheerleading program – a team that has been nearly unbeatable in competition during that time. In the fall, Western’s co-ed cheer team won its 34th national championship in 35 years at the PCA National Collegiate Championship, and Coach David-Lee Tracey, or ‘Trace,’ has been behind every single one.

Tracey has lived and breathed the sport, coaching multiple generations of athletes along the way, all while continuing to share his passion for the sport with people of all ages. A Western graduate (BA ’81) himself (Kinesiology), Trace has led the Mustangs cheer team since 1980 while also serving as a Canadian National Team coach and coach of the Fanshawe College Falcons cheer team (a program he started in 2007).

And, he’s the owner of Power Cheer Gym, which year after year wins medals at meets and produces some of the most talented cheer teams – and athletes – in the country. Opened in 1998, it’s the largest dedicated cheerleading gym (10,000 square feet) in Southwestern Ontario.

“We’ve built something special at Power Cheer Gym, and it’s a real treat to watch youngsters grow to become extremely talented cheer athletes,” says Coach Trace, who estimates he has coached and trained with more than 10,000 cheerleaders over the last four decades. “It never gets old, coaching and helping develop athletes. Our goal is to teach the skills that help create better athletes – and better people.”

Tracey was part of a transformation of cheerleading in the 1980’s, which saw the sport shift from ‘rah rah’ performances at football games to much more of an athletic endeavour. And Trace was ahead of the curve among coaches in Canada. He was already taking teams to the U.S. to learn from their collegiate programs in 1985, and he’s been at the forefront of the athleticism and technical side of the sport ever since. In fact, Trace says, it is athletes who are turned into cheerleaders – not the other way around.

“In today’s cheer world, athleticism is the key component, and we can teach the cheer aspect,” says Tracey. “We’re always looking for athletic youngsters who would like to give cheerleading a try. We’ve turned so many talented kids into cheer champions that I’ve lost count. And I’ve been proud to coach every one of them.”