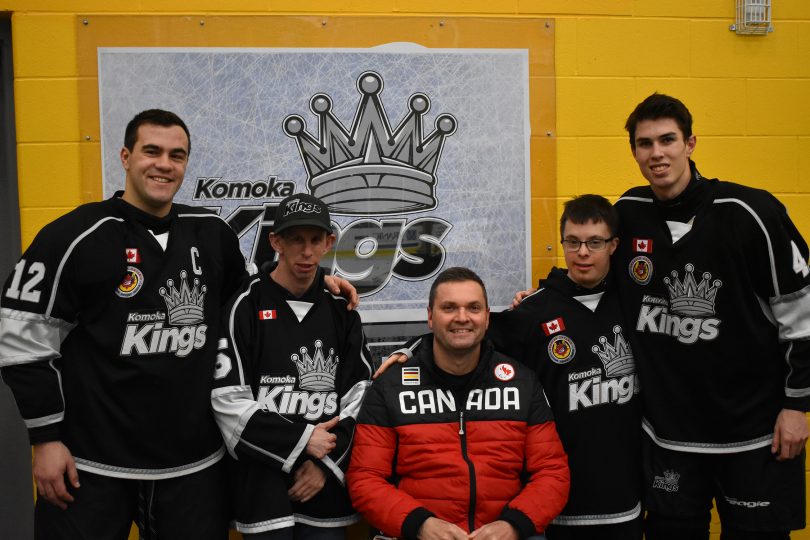 With the playoff season starting in March, the Komoka Kings bolstered their ranks with acquisitions just before the trade deadline. Forwards Ryan McAllister (a Sudbury Wolves draft pick) and Bryce Lewis, both Londoners, came from the London Nationals for Kings forward Wes Dobbin, while the Kings also acquired defenceman Carson Pearce, from Kilworth, who recently played for the Odessa Jackalopes of the NAHL.

“Our play has been getting better during the season, but adding more firepower and tightening up our defence will make us more of a strong contender during the playoffs,” said Kings head coach, Ron Horvat.

“We’ve struggled on and off through the season, but we’ve put together some fantabulous games against the top teams in our division,” added Horvat. “We have the talent to take on any team in the league, and as long as our players are focused on the game at hand, they can defeat any of them.”

Kings forward Luc Arsenault was recognized by the GOJHL as the defensive player for the month for December at a presentation prior to the Kings’ January 26 game. The regular season wrapped up for the Kings on February 23 after some great Saturday home games against division rivals and teams higher in the standings. And then it was time for playoffs    !

The Kings hosted an Events Night on January 12 for those with Special Abilities. Joining the event was Paralympian Mark Ideson, a bronze and gold medalist, who dropped the puck alongside two of our devoted fans in the Kings family.

Golden Opportunity Assistance (GOA Dogs) owner Donna Frezell did a presentation during the first intermission on how dogs are beneficial to those who need assistance – including dogs who are able to pick up laundry, remove coats and even help with a wheelchair.