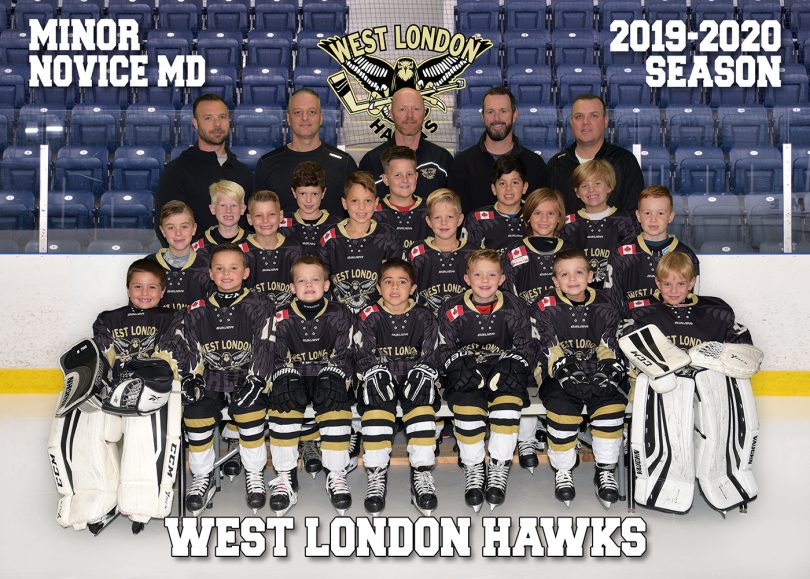 What is success for the West London Hawks Minor Novice MD team? According to Nathan Doan, the team’s head coach, it means – above all else – having fun on and off the ice. It also means each player developing his skills throughout the year, and the players learning to play as a team.

On the teamwork front, this group of youngsters is already ahead of the curve. In fact, it’s one of their greatest strengths.

“Witnessing these players at such a young age already looking for their teammates is a special thing,” says Doan, who coached most of the players on this year’s Hawks team last season. “The players’ engagement and passion for the game makes coaching this group an absolute pleasure.”

The Minor Novice MD Hawks, who play their home games at the Bostwick Arena in West London, are focused on improving their skills each and every practice and game. This includes developing individual skills like skating and stickhandling.

The team got off to a good start in the fall, competing well in exhibition play and into the regular season once November hit. And they showed early their ability to work hard – including learning their new positions and competing hard on the ice.

“One of our goals is to always be the hardest-working team on the ice,” says Doan, who has been helping with minor hockey development since 2014 – and has played and been involved with hockey in London for more than 25 years. “But the ultimate goal, of course, is to develop and grow the players’ love for the game of hockey. This sport can bring players many experiences and opportunities throughout their lives. If we can help foster and grow a love for the game, it will hopefully keep them involved and benefit them well into their futures.”

Submitted by Nathan Doan and photo by Camera Canada