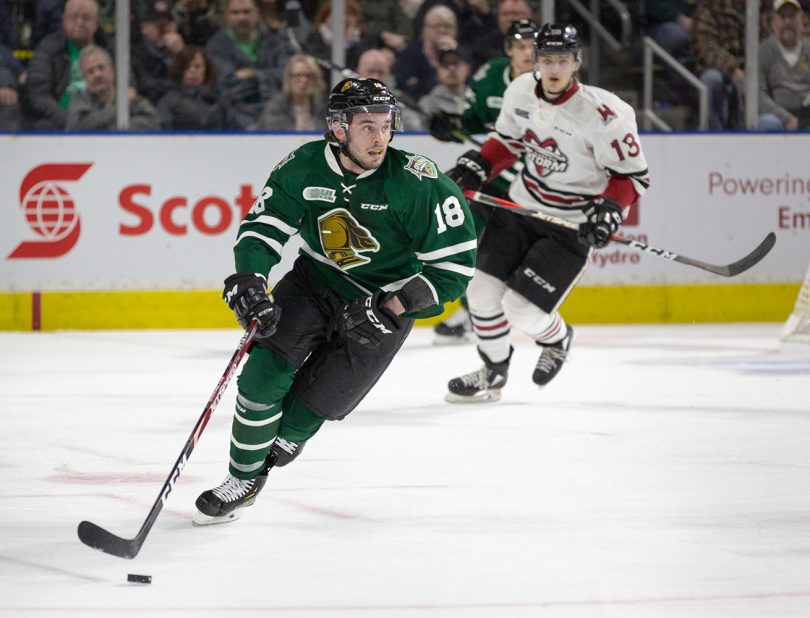 The London Knights flipped the script in 2018-19, rebounding from a subpar season a year ago to dominate the OHL’s Western Conference this season, finishing atop the Conference during the regular season – and only behind the East’s Ottawa 67s overall.

In what has become a near yearly tradition at Budweiser Gardens, the London Knights capped off a dynamic season of dominance with a 1st-place finish in the Ontario Hockey League’s Western Conference.

Expectations for the team were somewhat hedged prior to the beginning of the season. But coming off a 2017-2018 in which the Knights stumbled to a 1-9-0-0 start before rounding into form for a fourth-place finish and a first-round exit at the hounds of the Owen Sound Attack, there was significant pressure for this year’s iteration to pick up the slack and get the team back to the Promised Land.

This year’s Knights faced a similar problem to last year’s squad out of the gate, as star players Evan Bouchard and Alex Formenton were absent at the beginning of the season while they attempted to crack the NHL rosters of the Edmonton Oilers and Ottawa Senators, respectively. Both players managed to score their first NHL goals before being sent back down for one more year of junior hockey seasoning. Without their two longest-tenured stars, the Knights treaded water, staying above .500 while integrating new players like Antonio Stranges and Adam Boqvist, with established returnees such as Connor McMichael and Alec Regula. Once they had their full lineup together, though, the team never looked back, racing to first place in the West on the back of a 15-game winning streak that stretched the entire month of November.

Over the course of the season, the Knights had several players produce standout performances. Notably, Adam Boqvist scored 20 regular season goals as a first-year defenseman in the OHL, Liam Foudy produced a remarkable 10-game goal-scoring streak, and 17-year-old Connor McMichael led the team in scoring with an eye-popping 72 points in 68 games, vaulting him up many draft boards.

Maybe the most statistically amazing season, however, came from overage trade deadline acquisition Kevin Hancock, who after starting the season in Owen Sound, produced 45 points in just 33 games with the Knights, bringing his season long totals to 52 goals and 107 points.

Simply put, the Knights put together a season which, for most franchises, would be one for the record books. For this franchise, however, a 46-win campaign is only good enough for an 11th all-time best record. But after a season (in 2017-18) which saw the Knights produce their worst record since 2011, it was certainly relieving to the see the team back on top, in familiar territory.

By Connor Loucks and photos by London Knights