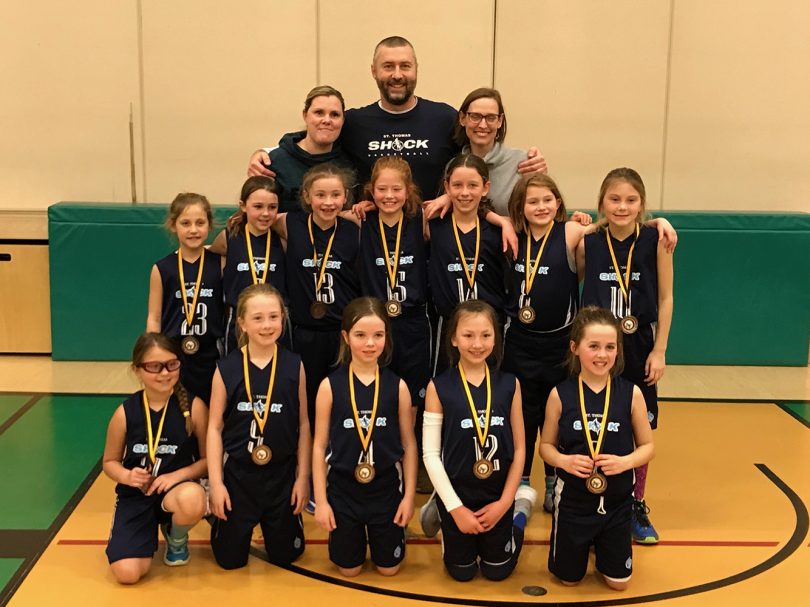 By all accounts, it was a highly successful season for the St. Thomas Shock U10 Novice Girls basketball team in 2018-19. Not only did the girls continue their development – both on and off the court – but they achieved some impressive success along the way.

Playing out of St. Thomas and at tournaments throughout Southwestern Ontario, the U10 Novice girls became the first team to ever be ranked high enough to play in Division 1 as they competed at the Ontario Basketball Association (OBA) final tournament. The first team in 16 years of Shock basketball, across all age groups and both boys and girls teams.

“This was a great accomplishment, and we were very proud of our young athletes,” said coach Greg Moore, who has been involved with the Shock organization for the last three years. “One of the things that helped us be so successful this season was the kids’ ability and willingness to listen.”

In fact, the U10 Novice girls players showed up to every and game not only eager and enthusiastic, with smiles on their faces, but also ready and willing to learn and improve their skills in all facets of the game. The effort they put forth, Moore says, was refreshing.

“Our girls were extremely positive, and not only did they give it their all every week at practices, but they did the same during games as well,” the coach said. “We won our share of games, and while it’s easy to stay motivated when you’re winning, these girls kept the same level of intensity and work ethic when they were trailing as well. They played hard and never slowed down.”

Some of the players were not as experienced as others, and Moore and his fellow coaches, Betsy McClure and Ali Burgess, made sure that all players experience development – and at their own pace. One way they did this was by having more experienced players take on a leadership role and help their less experienced teammates feel more comfortable on the court.

“This not only helped certain kids develop as players, but it also helped the girls bond nicely over the course of the season,” Moore said. “And a lot of the credit is due to my two wonderful assistant coaches. Without [Betsy and Ali], there’s no way we could have accomplished what we did this season without their amazing contributions.”