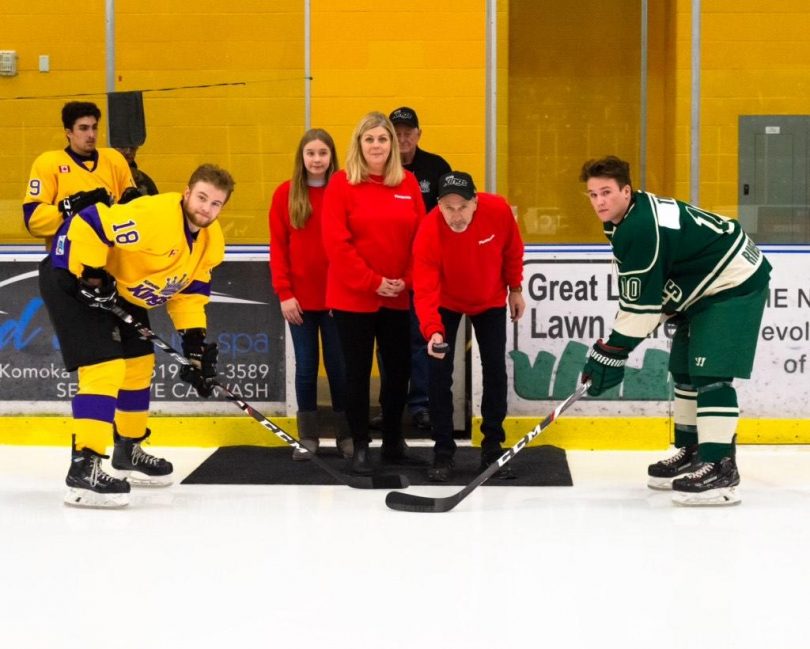 As part of their ‘Pack The Rink’ promotion while celebrating their first anniversary, the Komoka Foodland store was on hand to drop the puck for the December 7 game between the Komoka Kings and St. Marys Lincolns.

The GOJHL Komoka Kings finished the first half of the 2019-2020 season with some ups and downs – and some surprises. There were some big wins – like their 6-3 victory over the first-place London Nationals at the Western Fair in October. And there were some disappointing losses – like the 5-4 OT loss in October against the Nationals (after scoring three unanswered goals to tie the game late in regulation) and another 5-4 double OT loss to the rival Strathroy Rockets on December 3.

The Kings continue to battle for points and playoff position and have made some roster changes – including a trade with the St. Thomas Stars for defenceman Connor Federkow and forward Russell Oldham. The team also brought in 6-foot-5 goaltender Rahul Bola from the Hearst Lumberjacks of the NOJHL and defenceman Tyler Lovie from the Cochrane Crunch (also of the NOJHL). Meanwhile, the Kings lost rookie defenceman Christian Kyrou, as he was called up to his OHL draft team, the Erie Otters.

In December, the Komoka Foodland store celebrated its First Anniversary in Komoka with a week-long promotion of specials and events culminating with the ‘Pack The Rink’ game on December 7. Komoka Kings players were at the store during midday to help customers pack groceries and for pictures with shoppers/fans.

Komoka Foodland’s Ron Alexander and Lauren Pettinger arranged for a Toronto Maple Leafs jersey autographed by former Leaf Assistant Captain Darcy Tucker to be donated as a draw prize for fans who brought a canned food item for the local food bank drive. Komoka resident Linda Jarvis was the lucky winner. Foodland also purchased all the tickets to the Dec. 7 game and offered them as free admission to customers at the Foodland store. The promotion was a huge success, and it provided the Kings with a boisterous fan base for the game (although not quite enough to earn a win over the St. Marys Lincolns).
The Kings had some tough games in December before the short Christmas break and then a heavy January schedule that will most likely determine the standings and playoff positions. All Kings home games are at the beautiful Komoka Wellness Centre with a 7:15pm puck drop.