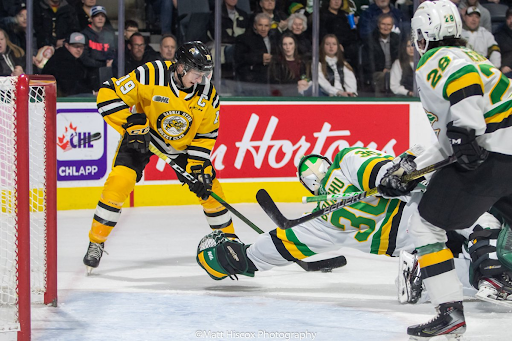 Brett Brochu, who enjoyed a phenomenal season in net for the London Knights in 2019-2020, rose from a bench player to undisputed starter to one of the OHL’s leading netminders.

A tough loss last December proved to be a turning point for Brett Brochu. The Knights keeper had allowed six goals (on 24 shots) in two periods against the Kitchener Rangers before being benched for the final frame. Following the loss, the coaching staff made a decision that was a first on the year: play the 17-year-old goaltender in a back-to-back following a defeat. They wanted to see how he would fare given what unfolded the previous night.

Brochu responded – and the game was a turning point for the youngster, who emerged as one of the better keepers in the league.

Playing against the Sting in Sarnia, Brochu stopped 27 of 30 shots and, although the Sting forced overtime in the dying seconds, the 17-year-old earned the win after Billy Moskal won the game for the Knights with an overtime winner.
The victory proved to be a watershed moment for both Brochu and the team, who would go on a 10-game winning streak between January 12 to February 7.

“That was one of the big turning points for [Brochu],” goaltending coach Daren Machesney said of the contest. “He bounced back, and to me, he was our number one guy from that point on.”

Not often do you point to a loss as a turning point in a player’s season, but for a rookie goaltender learning to keep level-headed throughout a 68-game season, figuring out how to bounce back after a tough loss can be momentous.
But Brett Brochu is no stranger to adversity. He’s been defying expectations his whole career.

Standing at just five-foot-six, he was deemed too small by many OHL scouts. It was almost by chance that the Knights’ scouting team stumbled upon the undersized goaltender, who was stealing games that his team had no business winning.
“We would come to games to look at other goalie prospects that were highly touted, and Brett wasn’t talked about,” Machesney says. “He would beat all of them. You can’t pass on a kid like that.”

The organization ended up taking Brochu in the sixth round of the 2018 Priority Selection – the eleventh goaltender taken in the draft. But then came the next hurdle: he had nowhere to play. With the Knights’ crease occupied by the returning duo of Joseph Raaymakers and Jordan Kooy, Brochu had to look elsewhere for work.

After being cut from multiple Junior B teams, an offer eventually came from Jason Badder, general manager of the Dresden Jr. C Kings. They were in dire need of a goaltender. Badder promised Brochu the ice time that a 16-year-old goaltender needs to develop.

“I was told I would get 20 games,” recalls Brochu, who accepted the offer.

In fact, he went on to win 27 games in 38 starts and was named the league’s Rookie of the Year.

“He was good enough to start in Junior B and would’ve carried any team,” Badder told Ryan Pyette of the London Free Press. “I’ve never met a kid more determined.”

Brochu’s showings in Dresden did not go unnoticed in London. He signed with the team in July – although he had no guarantee of ice time. Jordan Kooy was returning for his fourth season, and the Knights had recently acquired Matt Onuska from Kingston.

If the 17-year-old wanted to play, he knew he’d have to earn it.

“I was told there were going to be three goalies, and it was going to be a battle for the backup role,” said Brochu.

But by the time December came around, Brochu was no longer battling for the backup spot – he was being tested out as the starter, and for a London team that had worked its way into the CHL’s Top 10 Rankings.

Anyone who hadn’t heard the name Brett Brochu before the beginning of 2020 became aware of the goalie while he gave 15-year-old sensation Shane Wright a run for his money for the OHL Rookie of the Year award.

Brochu, who will still be just 18 at the season’s start in December, has set a high standard for himself. He will likely be the starter in London, and he will also fight for a spot on Team Canada for the 2021 World Junior Championships.