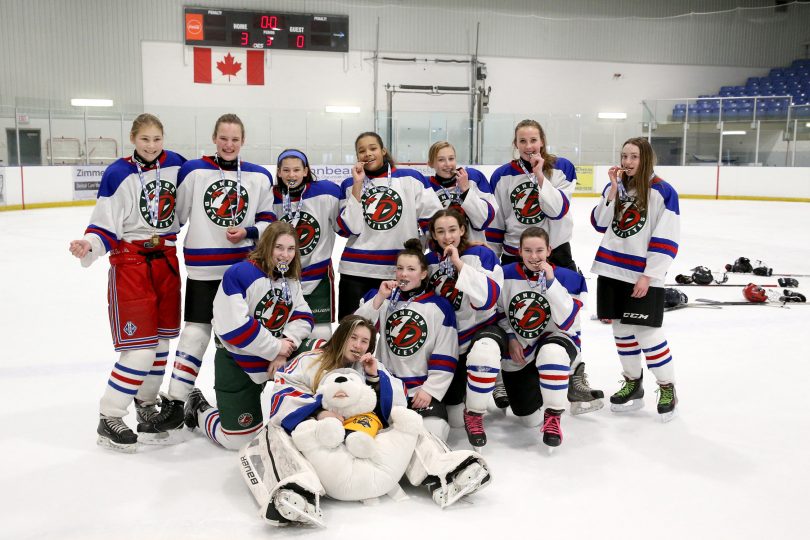 It’s been a successful winter for the London Devilettes Bantam hockey team, and one of the highlights came in January, as the team won the Bantam hockey tournament in Wilmot, Ontario from January 11-13 and proudly brought home gold medals.

In what was the second tournament of their season, the Devilettes performed strong from start to finish in Wilmot, losing only once and beating Waterloo, 3-0, in the finals. It was a great experience, and a lot of fun, for the team to see other teams from all over the province (and sometimes even the United States). These tournaments are not easy to win, as there are a lot of strong teams.

London goaltender Kennedy Thorne earned three straight shutouts en route to helping her team win the tourney. Kennedy has only been playing Ice hockey for three years. Halfway through her first season, she decided to try playing goalie and she never looked back. Now in her second full season with the Devilettes, that tournament final victory was her 10th shutout of the year (Kennedy also plays Ice hockey with the boys in the red circle league to keep her busy over the winter).

The London Devilettes, who are coached by Shane Harkness, had been playing well all season, but for most of the girls the Wilmot experience was their first ever tournament win (the team made it to the final in their first tournament but ended up finishing second).

The players, coaches and parents have enjoyed a successful season.

Said Devilettes forward Skylar Leboldus: “We have a really good team this year, thanks to our coaches and hard work from our players.”