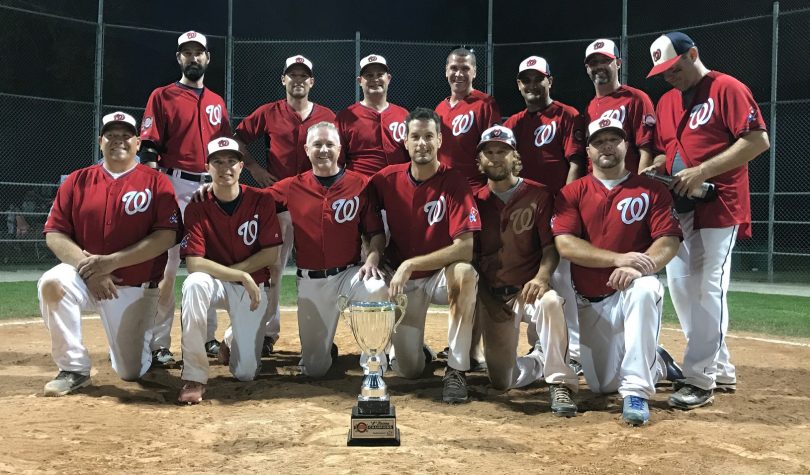 The Werewolves, in first place in the LMBL standings heading into late August, won a league title (A champions) back in 2017.

With the majority of the season behind them, the mighty Werewolves remained in first place in late August in the London Mens Baseball League (LMBL) standings, with only two losses to their name, and continued to look like the team to beat this season.

One of those losses, though, came at the hands of Aquarium Services, who beat the Werewolves in a one-run game in late August to close the gap in the standings. Following that game, the Werewolves’ lead was reduced to a three-point margin, with Aquarium having a game in hand. In other words, everyone will be watching closely over the final weeks of the season to see if the upstart Aquarium Services team can take over top spot – although they do have their work cut out for them!

If you had the opportunity to catch a game this season, it would have been easy to see why the Werewolves dominated most of their games. Phil Bruijns, Tom Couchie and Robert Ramsdale were nearly untouchable on the mound throughout the regular season. Meanwhile, offensively, every player on the team’s roster had an on-base percentage of .333 or better. In other words, it’s been tough to prevent the Werewolves from scoring runs this season. That combination of stellar pitching and phenomenal hitting has made them a mighty force, well-positioned to make a run at the title this fall.

Robert Ramsdale, a local software developer and family man, is in his third year in the LMBL. As of late August, he had an ERA of … wait for it … 0.00! Ramsdale has played baseball for 30 years – and in some impressive places, including New York, Georgia and Australia. He’s even played against our very own London Majors, during his time with the Brantford Red Sox. During his Intercounty Baseball League career, he was part of five championships teams (all five of his seasons with the Red Sox).

Meanwhile, at the plate, Jeff Roy has been a force. When a player has a batting average over .500, you take notice. Roy had 11 hits in 21 at-bats (.524) with 10 runs scored in his first 29 plate appearances. Roy got his start in hardball right here in London. He played one year with the Majors, and then played softball for some time until he joined the LMBL in his thirties.

LMBL players and teams (which will likely include the likes of Ramsdale, Roy and the Werewolves) will be celebrated at the Year End Awards Banquet on Friday, October 18 at the Willows Golf & Country Club. Tickets are available through the London Mens Baseball League website.

It should be an exhilarating and exciting final stretch run of the regular season and the playoffs. Stay tuned! You can find our full schedule online at www.lmblbaseball.ca.