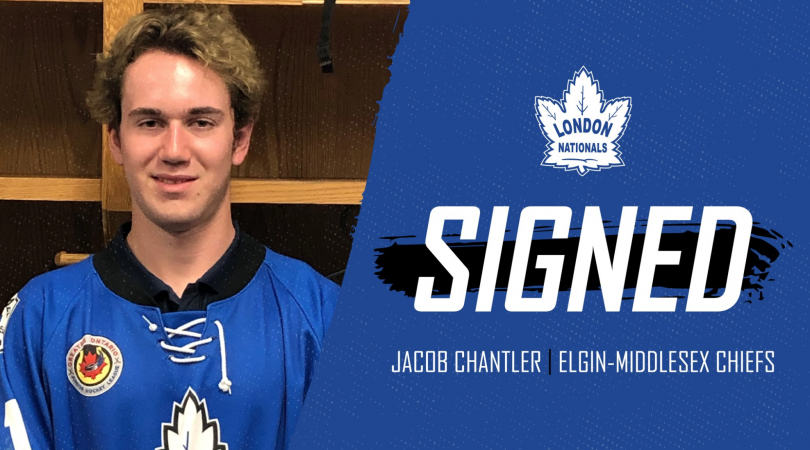 The London Nationals are not finished; four straight conference titles, while impressive, was never the goal.

Coming off a heartbreaking loss in overtime of game seven in the Sutherland Cup final, the Nationals must look to regroup and rebuild for the year ahead. Returning players shouldn’t dwell on the past, while new players should look to make their mark on an already storied franchise. There will be significant roster change, with several notable names aging out or moving on to other leagues. But while it is still unclear exactly who will stay and who will go, the team has wasted no time in signing several highly sought-after prospects, including Nathan Small, Michael McKnight, Jacob Chantler, and Joey Studnicka.

Who are they? What will they bring to the team? Nationals Head Coach and General Manager, Patrick Powers, has nothing but praise and hopeful optimism for each one of them.

That includes Nathan Small, a Dorchester native, who previously played for the Elgin-Middlesex Chiefs. He was the top defenceman in the league, notching six goals and 37 assists in 34 games played.

“Nathan is a smooth skating, elite puck moving defenceman who will help generate offence on the back end – both five-on-five and on the powerplay,” said Powers. “He’s a very well-rounded defenceman who uses his extremely high hockey IQ to see plays before they develop.”

Michael McKnight, meanwhile, also spent the past season with the Elgin-Middlesex Chiefs, where he was the team’s leading scorer (16 goals, 27 assists in 33 games played) before joining the Nationals for the end of their playoff run.

“Michael is an aggressive up and down the wall winger with explosive speed who uses his body well to generate space,” said Powers. “He has an elite shot which we expect will help him become a very versatile offensive player. He’s a character young man who ingrained himself well into our dressing room during the Sutherland Cup final this [past] season.”

Jacob Chantler, another member of the Elgin-Middlesex Chiefs, posted an impressive 13 goals and 15 assists in his 35 games played this past season.

“Jacob is a big body with a tenacious work ethic,” Powers said. “He will be a very important part of the team at the faceoff dot, where he has shown an ability to win big faceoffs on a regular basis. Jacob will very quickly gain the attention of the opposing team with his aggressive style of play.”

And how about Joey Studnicka? He was the first signing of the offseason from the London Junior Knights.

“Joey is a fast-skating forward who loves to possess the puck,” said Powers. “He’s an elusive player who will generate offence both on the rush and low in the offensive zone. Joey was acclimatized to the GOJHL during the playoffs this year with the St. Thomas Stars, so his transition to the league should be minimal.”

With more signings to come, and inevitable moves before the trade deadline, there is no telling what will become of the Nationals’ 2019/2020 roster. Only one thing is certain: a fifth straight conference title is not the goal, because the London Nationals are not finished.

Submitted by the London Nationals