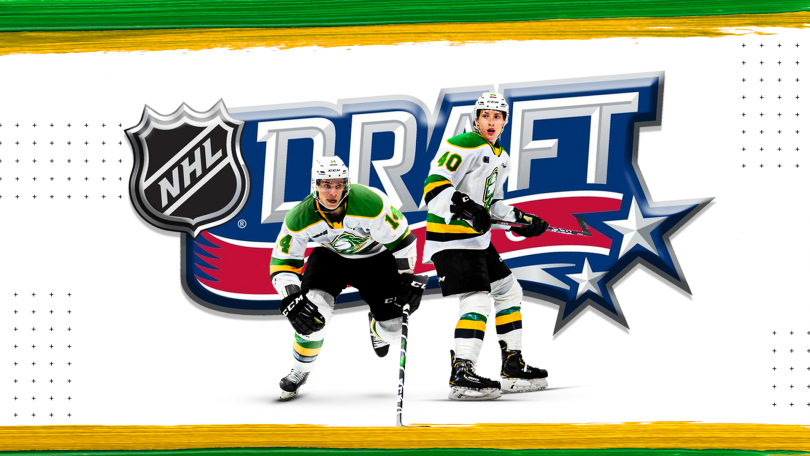 The 2020 NHL Entry Draft took place virtually over two days October 7-8. And while they may have had to wait an extra three months, and didn’t get to walk on stage in front of thousands of people, it was still a day the young men selected have been training for their whole lives.

With delayed reactions via Zoom, celebrity guest appearances, and players finding out they got drafted while on the ice, it was certainly a unique event – and one that, without a doubt, two London Knights players and one import pick will never forget …

John-Jason Peterka, LW – 34th overall, Buffalo Sabres
The German forward was chosen by the Knights with the 55th pick in this summer’s CHL Import Draft after an impressive first season in the DEL. Peterka shone in limited minutes on a dominant Red Bull Munchen team, but the hype surrounding him really began at the World Juniors, where he had four goals and a pair of assists in seven games. He joins an exciting young core in Buffalo led by Jack Eichel, Rasmus Dahlin and the eighth overall pick, Jack Quinn.

Said Rob Simpson, Knights Associate General Manager: “JJ is a strong skater and has elite puck control, making him tough to defend both in open ice and along the boards. He had a great showing at the World Juniors, demonstrating exceptional play in both ends of the ice. He has an elite-level shot and can score goals from all angles.”

Luke Evangelista, RW – 42nd overall, Nashville Predators
For the first time in draft history, the Predators selected a Knight, using their second-round pick on Evangelista. Coming off a rookie campaign in which he saw limited ice time, the winger was thrust into a top role after a hot start to the season. In his first nine games, he managed a hat trick against Kingston and a three-assist night vs Erie. He finished the season at a near point-per-game pace, with all but two of his points coming at even strength. The Oakville, Ont. native is primed to take another step forward next season.

Simpson: “Luke possesses elite hockey sense and passing ability. His skill with the puck is at a very high level. He can play in multiple roles within a team because of his strong 200-foot game. Luke can excel in a top-six role in both zones and play against other top players.

Antonio Stranges, LW – 123rd overall, Dallas Stars
Stranges has been one of the most talked-about prospects in his birth year since his days in the Detroit Little Caesars program – and for good reason. Whether it’s the jaw-dropping shootout goals, the heel-to-heel skating stride, or the unconventional ways in which he scores, the American winger is a spectacle to watch. Despite limited power play time, and the amount of forward depth on the team, Stranges was able to improve on a stellar rookie year, scoring six more points in five fewer games.

Simpson: Tony is an elite skater with incredible offensive ability. He can make plays with limited space to create opportunities for his teammates. He has elite hand-eye coordination and puck handling ability. Tony has a unique talent for using his forehand and backhand in passing and shooting off both sides of the puck.

By Kyle Watson and photo by London Knights