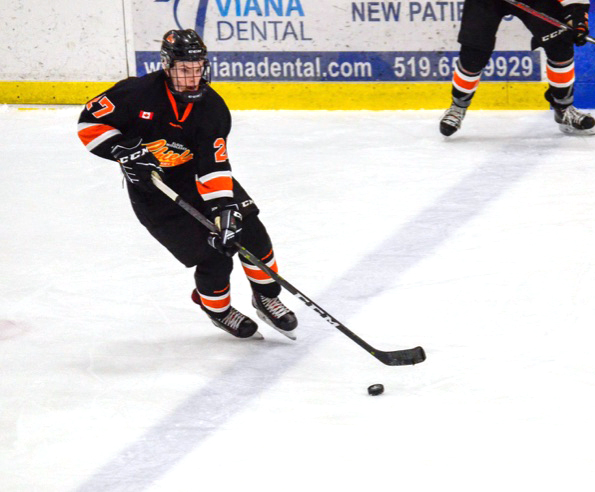 The Elgin Middlesex Chiefs (EMC) Major Midget team succeeded in every facet of the game in 2018-19, and as a result their strong play earned them an Alliance league championship, as they defeated the Waterloo Wolves for the honours (capping the series off with a 7-1 win in Game 5) before moving on to the Telus Cup Regional Midget AAA Championships.

“Our weekly sessions at Snipe significantly contributed to our offensive output this season,” Warren said. “Our players’ shooting accuracy, with quicker release, as well as a better ‘feel’ for the puck while stickhandling have made us a better hockey team.”

Two players who certainly took advantage of their training at Snipe Academy (the rapid shot team program) and have positioned themselves to have successful hockey careers include Connor Olson and Jacob Chantler. Olson was recently drafted by the Erie Otters 3rd overall in the 2019 OHL Player Priority Selection, while Chantler went 19th overall to the hometown London Knights.

Olson, a 17-year-old defenseman, is a smart two-way player who has a hard, accurate shot from the point, and he knows when to sneak ‘back door’ as a pass option. Prior to joining the Chiefs, he played for the London Jr. Knights for seven years (Minor Atom to Minor Midget).

After breaking his arm a few years ago, he began attending the Total Package Hockey Training Centre to rebuild muscle and strength. This year, within the Thames Valley District School Board, he enrolled at the Academy for Sports and Athletic Development (ASAD) where he trained every morning. Meanwhile, along with regular practices with the Chiefs, he worked on his shooting at Snipe Academy.

Chantler, a 16-year-old forward, plays a tough game but with superior hockey IQ. He is a great teammate and is very coachable – and he has a great shot, which he works on at Snipe Academy. Since he’s a strong presence in front of the net, particularly on powerplays, he also works on tight scoring and details like tipping pucks and shooting from odd angles.

Starting hockey at age 5, he played three years with the Oakridge Aeros and then seven years with the London Jr. Knights. The St. Thomas Aquinas student was an affiliated player (AP) for the London Nationals in his Minor Midget season and an AP for the Strathroy Rockets this year.

Besides working on his shot at Snipe Academy in-season and during the off-season summer months, Chantler is also a junior coach at the facility, which means he helps coach young kids at the Academy.

Both these players are great representatives of Snipe Academy and both have promising futures in hockey!