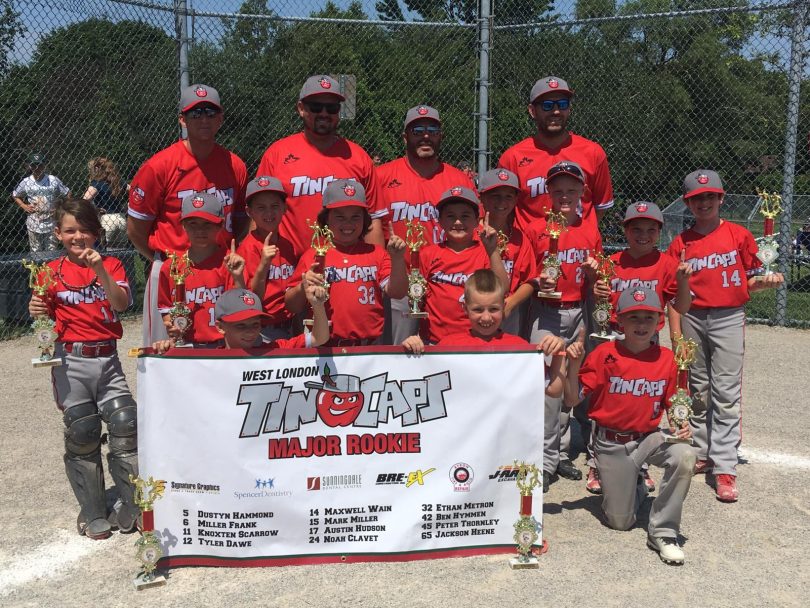 To say the 2019 summer ball season was a success for the London West Tincaps Major Rookie team would be an understatement. The team did a whole lot of winning – both in league play and in tournaments.

Playing against some talented competition in the London District Baseball Association (LDBA), the Tincaps went 14-4 overall, good for third place in the standings. And they finished strong, winning nine of their final 10 games on the year.

One of the highlights of the season for the U9 Tincaps came during tournament play, as the team played fantastic baseball the weekend of July 5-7 and won the 2019 Bob Stark Rookieball Tournament!

Playing on the Oakridge diamonds, the Tincaps opened the weekend Friday afternoon with a convincing 13-5 win over the Waterloo Tigers, racking up 19 hits in the win. The following day, the Tincaps were too much to handle for the Barrie Baycats, as they walloped their way to a 16-5 win.

That set things up for a semi-final against the Ajax Spartans. And the Spartans gave the Tincaps a run for their money. Trailing for the first four innings, London put up a huge seven-run inning to go ahead by two. But Ajax fought their way back, tying things up in the bottom of the seventh to send things into extra innings. There, some of the most exciting baseball of the season was played, as the two evenly-matched teams went back and forth until the 11th inning when, with the game tied at 15, the Tincaps loaded the bases and ended things with a walk-off triple to win 16-15.

In Tincaps capped things off with a big 14-9 win over the Pickering Redsox to become 2019 Bob Stark Rookieball Tournament champions.

Contributions by West London Tincaps and photo by Kerri Heene