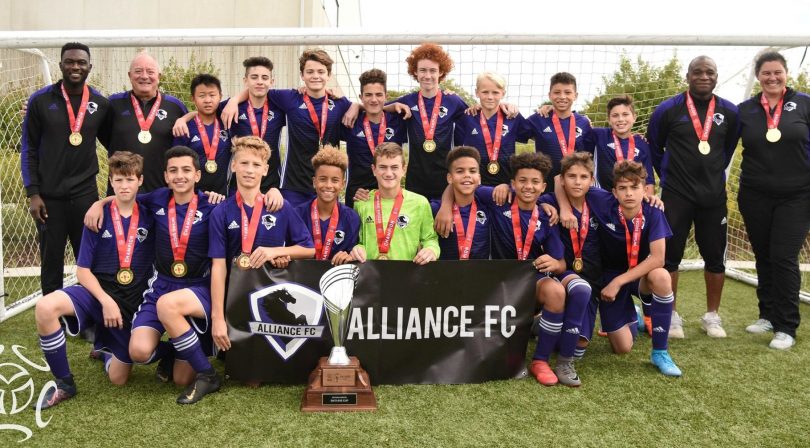 The Elgin Middlesex Soccer Association (EMSA) hosted its inaugural Recognition Awards on Saturday, November 16 at the BMO Centre, and the event was a big success. Twelve awards in all were handed out, recognizing some fantastic talent within the organization, which includes almost 16,000 registered players, over 1,000 team officials, and almost 300 match officials. Award winners included …

Female Youth Player of the Year – Destiny Franken (Woodstock U13G Strikers)
Destiny showed great leadership and dedication. Her love of the game was shown by continuous practice on the field and at home. Destiny made every game and stepped up when other teams in the club needed extra players. She was first for goal scoring for most of the year and placed 2nd overall in her division. Destiny is a flexible player who has learned to play all positions and even stepped up to play goalie when the team was in need.

Female Youth Team of the Year – Dorchester SC U13G Alliance
This team won the Kick-Off Cup in the Western Ontario InterDistrict League and were champions in three high-ranking competitions (Hamilton Sparta McMaster U14, Umbro Top Rated Super Cup, and Robbie International Tournament). Undefeated and declared champions within their own WOISL league, this Dorchester team was also Ontario Cup Champions. The team plays with a high level of sportsmanship and fair play, and some of the players volunteer (and serve as role models) in the Alliance Youth Development Program (ages five to eight).

Male Youth Player of the Year – Theo Rigopoulos (Alliance FC U13 Mustangs)
Theo was the leading scorer in the U14 EMDSL Indoor League and in the U13 Ontario Cup. He was nominated by the Alliance RFC Technical Director to try out for the Ontario Provincial team. Theo’s attendance at practices and games throughout the indoor and outdoor season was the highest of any player on the team. He consistently exhibited a high standard of sportsmanship. Theo stands as an example to other players in his commitment to excellence. Theo is widely respected for both his ability and his demeanour.

Male Youth Team of the Year – Alliance FC U13 Mustangs
THE Mustangs had a tremendous 2019 season, scoring an unprecedented 110+ goals in their first year of eligibility in the WRSL. They topped their season by winning the most prestigious provincial tournament of all – the Ontario Cup. The boys showed tremendous sportsmanship and did not receive any red cards and only two yellow cards the entire season. They are respectful of their coaches, teammates and referees. Over the season, they developed as a team and individually, with players being invited for provincial pathways. The players on this team are selfless and encouraging of each other, and this helps them succeed off and on the pitch. They are a group of athletes to watch out for in the coming years!

Match Official of the Year – Jason Vaillancourt
Jason is an active match official in Canada’s Professional League (CPL) as an Assistant Referee. In addition, he has been selected to Canada Soccer’s NextGEN Program, which provides development and training opportunities to advance to the national list of referees and nominations to the FIFA list. Jason is always more than willing to help fellow match officials’ technical and experiential learning. He gives back to the EMSA community, as well, by helping with Education Sessions and Active Mentoring.

Senior Coach of the Year – David Day (St. Thomas SC WOSL Div 1)
David inspires the players of St. Thomas to play their best while encouraging the team to play with good sportsmanship and respect. He dedicates much of his time to two teams in the WOSL. David also displays great character on and off the field, consistently striving to be a great coach and mentor to the players of St. Thomas FC. David always tries to enrich the quality of soccer within WOSL.

Senior Male Player of the Year – Andrew Henson (St. Thomas SC WOSL Div 1)
Andrew is one of the youngest players on the St. Thomas team, and he gives his best every game. He is a versatile player who can play as a Striker, Left Wing or Right Wing. Andrew always respects his opponents on the field, and his humble character has not gone unnoticed by players, coaches and officials. He was the recipient of two awards this year for his ability on the field and for his positive attitude. Andrew is dedicated to the sport while striving to promote good sportsmanship on the field.

Senior Team of the Year – Taxandria SC WOSL DIV 1
This team is a group of players who have come together across multiple age groups to form a great team. The team reached a milestone this year by finishing first and being promoted to the Premier Division for the first time in the Club’s history. On top of this breakout year, one of its young strikers tied for the most goals. These accomplishments were achieved without a serious incident or red card. Several players are coaches elsewhere in the Club, and many have participated in the ‘expos’ for our young 3- to-8-year-old players.

Service Award of the Year – Bill McCallum
Bill has long served the EMSA district in many capacities. He has been a very high-level match official, working at the top levels in the province, as well as an instructor, assessor, coach, mentor, and role model, all while advocating for the EMSA district. Bill was a pioneer in developing youth and female referees. Many in the district have received some benefit from Bill’s tireless work. He was instrumental in developing the early iteration of the Referee Association we have today, and to this day he continues to give back to the referee community.

Sportsperson of the Year — David Humphrey
David is an active advocate for mentoring and club development. He has taken a leadership role in development match official programs in the other reaches of the district, and he works hard to connect clubs with the extensive offerings that the EMSA Referee Association has to offer. David has been a very active Mentor in the District to our new and upcoming Match Officials. His passion for mentoring is evident and inspires our next generation of Match Officials to continue in the trade and progress in their careers.

Volunteer of the Year – Steve Cobean
Steve has been involved with soccer in the Walkerton area for so long that his whole family has adopted his spirit for volunteerism, and they all make a significant contribution to the Walkerton Soccer Club. Steve makes an impact at every level of soccer in the area. He helps run leagues, helps run the club, coordinates referees, and he coaches multiple successful teams. The community and all surrounding communities owe him a debt of gratitude.

Youth Coach of the Year — Nikki Johnson (St. Thomas SC U14G Red)
Nikki loves the sport of soccer so much that she spends time doing 1-on-1 with players who want to improve their game. In her spare time, she organizes and runs a tournament while still concentrating on helping players improve their game. Said one soccer administrator of Nikki: “She has the most passion for a sport that I have ever seen as a coach.”