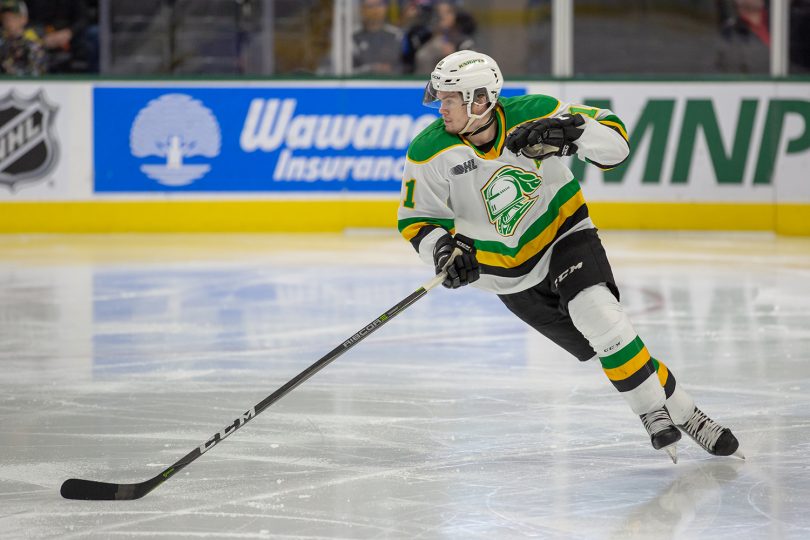 Knights forward Connor McMichael, who led the team in scoring this year with 102 points in 52 games, has transformed himself from an NHL draft afterthought to an OHL star and future pro.

When the London Knights traded Robert Thomas to the Hamilton Bulldogs in the midst of an exodus of stars in January of 2018, they needed to make sure they were adequately compensated for giving up their captain. Thomas was fresh off winning a gold medal with Team Canada at the World Junior Championships, and he was leading the team in scoring at the time of his departure.

Alongside an assortment of Bulldogs draft picks, rookie centreman Connor McMichael arrived in London for the second half of the season. The Ajax, Ontario native had impressed the Knights prior to being selected 11th overall by Hamilton in the 2017 OHL Priority Selection. Not unlike Thomas, McMichael was lauded for the defensive side of his game, as well as his intelligence and determination.

“We think very highly of this young man and think he’s going to be a star player in this league,” Knights GM Rob Simpson told Ryan Pyette of the London Free Press.

Fast forward two seasons and that prediction has certainly proved accurate. McMichael was named to the OHL’s second all-star team following a breakout season. Graduating to a first-line role in his third year in green and gold, he thrived with the increased ice time and was one of the most dangerous players in the league. His 102 points in 52 games were the most by a Knight since the trio of Mitch Marner, Christian Dvorak and Matthew Tkachuk all surpassed the century mark in the 2015-16 season.

Although those within the Knights organization knew the heights McMichael could reach, the scouting world didn’t foresee him turning into a forward capable of playing on a top line at the NHL level. Heading into his draft-eligible season, NHL Central Scouting assigned him a ‘C’ rating, indicating he would be selected after the third round. Even after leading the Knights in scoring and rising to 24th amongst North American skaters in the bureau’s final draft rankings, plenty of scouts didn’t envision the offensive upside that the centreman displayed this season.

In the weeks leading up to last year’s draft, most prospect writers slotted McMichael as a second-round pick. They pointed to his drop-off in production when not utilized in a top role and a lack of high-end skill or strength as reasons for his placement. Thus, they were critical of the Washington Capitals’ decision to select McMichael with the 25th overall pick.

They were promptly forced to eat their words when the 19-year-old took the ice this season. By November, he had been named OHL Player of the Week twice and sat second in league scoring. He established himself as the go-to-guy in London; when the Knights needed offence, McMichael was called upon. This was evident when he scored the fifth, sixth and seventh goals in a 7-6 overtime victory against Erie.

Some may look at McMichael’s surge in production and attribute it solely to an increase in ice time. However, according to Pick224, he played an average of 17.63 minutes a night in his draft year and 23.19 this season (a 32 percent increase) and scored at a rate of 1.07 points per game last year and 1.96 this season (an 83 percent increase!) The Capitals prospect clearly found a new level to his game.

McMichael credits his exploits to his time at Washington’s development camp.

“I feel like I got a lot of confidence up at Caps camp and I was able to bring that back here and show everyone what I learned,” he told Capitals beat writer Tarik El-Bashir.

Capitals head coach Todd Rierden noticed his first-round pick was absorbing everything around him. Playing alongside and against the defending Stanley Cup champions, McMichael became increasingly aware of the demands of the pro game.

“He was a guy that kept getting better every day,” Rierdan told El-Bashir.

When McMichael arrived back from camp, he was faster, stronger and ready to continue to work on his game. He demonstrated his ability to drive a line by himself and make high-end plays throughout the season.

National prospect writer Scott Wheeler of The Athletic noticed better puck handling ability and quicker feet from the six-foot, 181-pound forward, and said he would go higher than 25th overall in a redraft.

With the trajectory McMichael is currently on, it is a scary prospect to imagine him returning to play another year of junior. The Capitals currently have centremen Nicklas Backstrom, Evgeny Kuznetsov, Lars Eller and Nic Dowd signed through 2021-22, and the 19-year-old is ineligible to play in the American Hockey League for another season. Although where he will play next season is undetermined, one thing is for certain: The Knights decision to trade for McMichael has paid off and then some.

Submitted by the London Knights