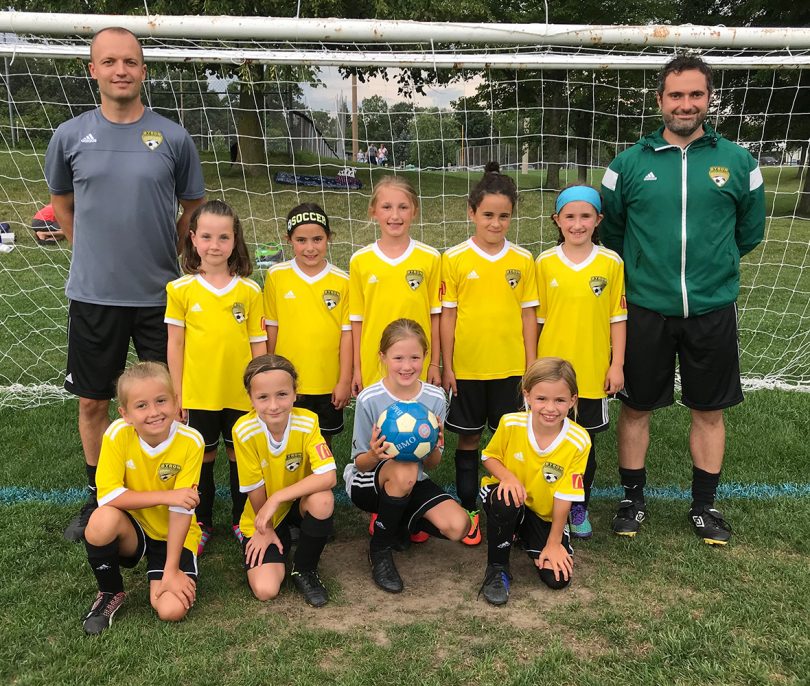 It was a season of learning, development and fun for Byron Soccer’s U8 Girls Yellow Team in 2019. And it was one of success on the scoreboard, as well, as the team enjoyed wins in league play, festival victories, and exhibition game triumphs!

In their first year of competition in the U8 division of the Elgin Middlesex District Soccer League (EMDSL), the U8 Byron Girls Yellow Team showed impressive teamwork on the pitch, as the players helped each other succeed and showed that team chemistry is vital for success.

“Their greatest asset is the ability to play for each other – both at practices and in games, says Luigi Sorbara, the team’s head coach. “On the field, this is evident in their defensive strength and their ability to score on the counter.”

The girls played their home games at the Byron Optimist Club, under the tutelage of Sorbara, who has been involved in soccer – both as a player and as a coach – for more than 30 years. Currently in his fourth season coaching with Byron Soccer, he was helped by Coach Matt and Coach Steve, both second-year coaches with the club.

“I’ve been coaching some of these girls since the age of 4 in the Active Start program in Byron,” says Sorbara. “While skill development and a better tactical sense of the game is the focus, the coaching staff also promotes an environment of constant learning and camaraderie.”

That was certainly on display – both on and off the field – for Byron’s U8 Girls Yellow Team throughout the 2019 season, and now they’re looking forward to switching their focus indoors and to the 2020 season.

“The coaching staff would like to thank the parents for all their support throughout the year,” says Sorbara. “We look forward to our move from 5v5 to 7v7 in U9 next season!”