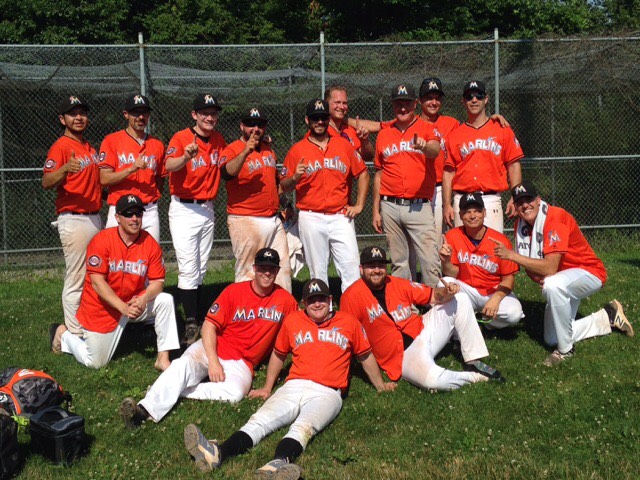 The London Men’s Baseball League (LMBL) expanded in 2017, this time from 12 to 14 teams. Adam Webb, who played for the LMBL Blue Jays since 2011, volunteered to manage one of the new teams, the Marlins.

“I had a great time with the Jays and was sad to leave, but I was excited about the opportunity to become a player/manager,” said Webb. “I’ve met some great guys and learned a lot.”

Part of that learning experience was a grueling 0-19 first season. Difficult first seasons are common for expansion teams, as players from different backgrounds, including slo-pitch, become familiar with the ins and outs of hardball. The Marlins persevered, though, eventually celebrating their first win in 2018, thanks in part to improved pitching and offseason practices.

“Although we haven’t had the instant gratification of winning seasons, our team has kept a positive attitude,” said Marlins Assistant Manager, John Weibe. “This has been largely due to a strong team bond and ability to celebrate the victories in small improvement. And there is a feeling that this could be a breakout season for the Marlins.”

The Marlins have lost three players for the upcoming season but have added two strong free agent picks. They plan to round out their roster with another player in the next draft.

“We’re playing better in every facet,” says Webb. “We’re hanging around and battling in the majority of our games now. I’m really looking forward to seeing what we can do in 2019.”

Story and photos submitted by LMBL