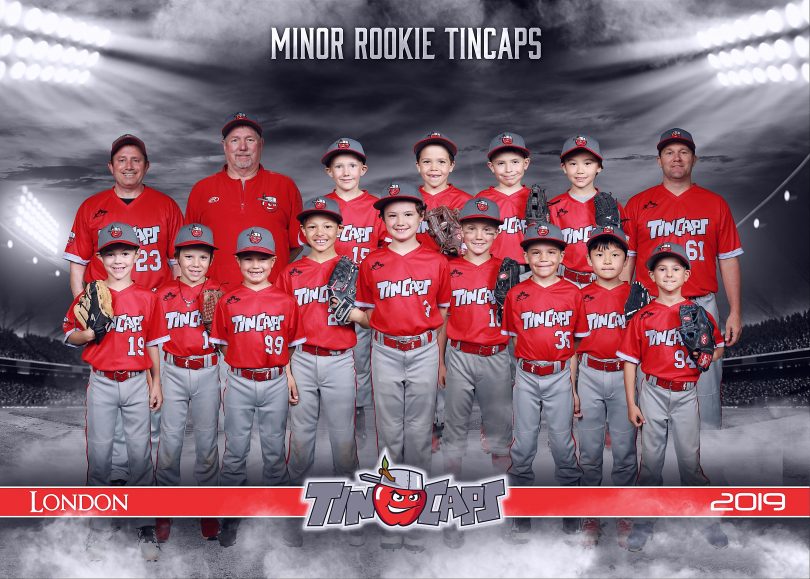 The London West Tincaps Minor Rookie team (b. 2011) is in good hands with their coach, Bob Caron. For starters, he’s been around baseball for decades, and his first memorable coaching experience came alongside his father in 1973 when he coached a T-ball team. He also experienced coaching with the late Bob Stark (or, simply, ‘Mr. Stark’), an LDBA Hall of Famer.

In 2009, Caron and his wife, Pat, took over coaching that team, and today he’s still coaching – at the youngest level within the West London Tincaps organization, the Minor Rookie squad.

“One of the best things about this age group is that they change so much from the beginning of the year to the end,” said Caron. “The key things we work on at this level is ‘where’s the play?’ and overall baseball IQ. We give them some basic rules to follow, but we also give them the confidence to adlib when needed.”

This year’s team, Caron says, is particularly enjoyable to coach because they’re quite anxious to learn and try new things on the diamond.

“Helping the players to love baseball is one of my key goals every year, and this team is already moving in that direction. When practice is over, I’ve heard complaining because they want to keep playing,” said Caron. “As far as competition, representing the LDBA in the OBA’s is always one of our goals.”

This Tincaps Minor Rookie squad has a good chance to do so, as the team has experienced a lot of success on the field this summer. In fact, they didn’t lose during their first 11 games of the season, winning 10 and tying one to put them in first place in their division heading into late June.

In other words, there’s a lot of talent on this Tincaps team. And there’s a lot of coaching talent, too. But Caron doesn’t go it alone. He’s helped, not only by his wife, but by friends Darryl Hayton and Jeff Van Haarlem as well.

“Baseball’s been a family experience for me,” Caron says. “Darryl and Jeff take a lot of the load off Pat and myself. This really works because of Pat, Darryl and Jeff. I’ve been lucky.”