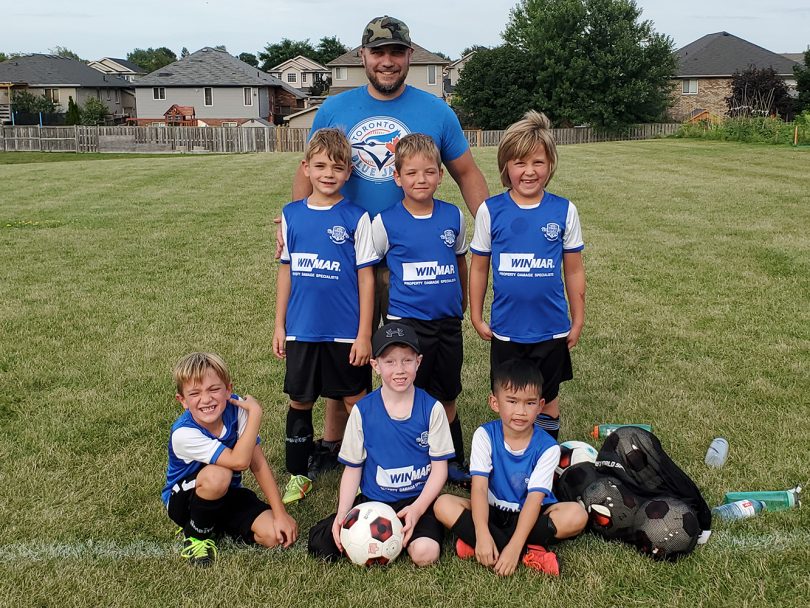 It’s all about fundamentals at the U7 level in NorWest Soccer’s house league program, and that’s exactly what the WINMAR-sponsored team focused on this summer. Playing at Hastings Park and at North Park Baptist Church, the U7 boys team practiced and played hard all season long, improving their soccer skills and their teamwork skills, too.

“The team showed noticeable improvement from the beginning of the season,” says Andre Iarusso, the team’s head coach. “We wanted them to get comfortable with the ball and passing to each other.”

And they came a long way in that regard, working on ball control and distributing the ball to each other while absorbing all sorts of other soccer knowledge and fundamental skills.

Iarusso learned a lot, too. Serving as a coach for the first time, he focused on doing whatever he could to help his players improve – and, of course, to have fun!

Most of their players were just six years old at the beginning of the soccer season, but the WINMAR-sponsored NorWest Soccer Royals actually played in the U8 Girls division, which was a challenge but also brought out the best in the young players, too, as they competed against an older age group.

“Our girls were playing against bigger and faster players, but they were never discouraged,” says Shawn Gaulin, the team’s head coach. “Every save, every goal and every milestone was a huge accomplishment.”

The Royals focused on the basics, including practicing ball control, passing and shooting, while also working on team play and positioning to help their development into becoming better soccer players.

“The girls always showed up with a positive attitude, ready to take on new challenges,” says Gaulin, a second-year coach who has played the game most of his life. “I’m very proud to see how far they have come since the first practice.”

Most of the team’s practices were at Hastings Park, with their games in and around London. Throughout the summer, they worked hard and showed dedication as they improved their skills, made friends and had a lot of fun.

“I’m excited about the girls’ future in the sport,” says Gaulin. “I hope they all continue playing soccer. I also want to thank all of the parents who supported us throughout the season by cheering us on from the sidelines. Go Royals!”