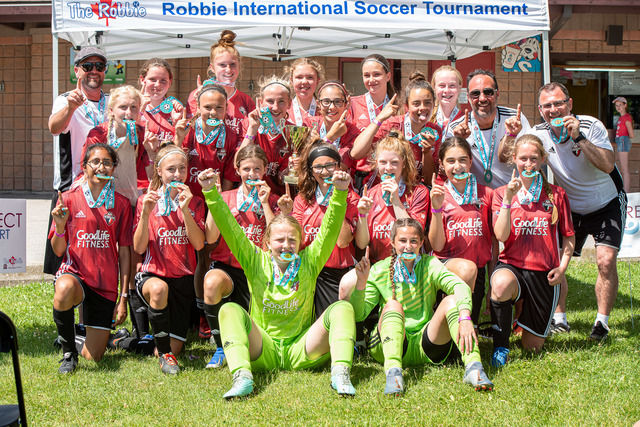 One of the highlights of the 2019 season for the Strikers was being crowned champions at the 53rd annual Robbie Charity Tournament, which they won on the eighth penalty kick against Barrie FC.

What a season it has been for the Woodstock Strikers U14 Girls soccer team, as the team has routinely won on the field and bonded as a team off the pitch.

“Coaching and management staff are very proud of the accomplishments of this team,” said Metaxas Makedos, the team’s head coach. “The girls train hard and play hard, and they continue to stay engaged in all aspects of the game.”

The Strikers got off to a fast start, finishing as finalists in the WRSL Kickoff Cup in May. In June, the team earned a gold medal at the Ancaster Heritage Days Tournament, beating Waterloo United in penalty kicks in the final.

Then it was the 53rd annual Robbie Charity Tournament, one of the highlights of the season. The U14 Girls triumphed at the event, one of the largest, longest-standing charity tournaments in Ontario. And they did so in exciting fashion, downing Barrie FC on the eighth round of penalty kicks for the win.

In July, the Strikers traveled south to participate in the University of Notre Dame’s Advanced Training Camp in South Bend, Indiana.

Upon returning, the U14 Girls participated in the British Soccer Camp week in Woodstock, and then won the Brantford Classic tournament at the U15 age group (one age group higher), beating Mount Hamilton 1-0 in the final.

The Strikers went 15-1-4 in tournament play, ranking 15th overall (in their age group) in Canada on the website Got Soccer. In league play, they were 9-2-0, at the time of this writing, with three matches remaining, locked in a tight battle for first place. The next round of tryouts happen in September.