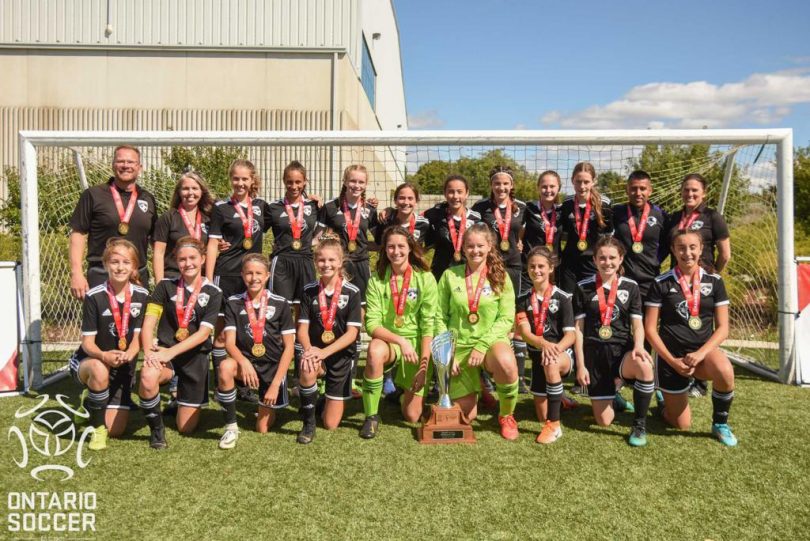 The Dorchester SC Alliance U13 girls had quite a year together, capping off a stellar season with a provincial championship. Kicking off their first year of scores and standings, the girls set out to make an impact – and they certainly did that.

Opening their outdoor season in April, the team attended the McMaster tournament where they played a year up and won the championship in the U14 Division. In May, they brought home the Umbro SuperCup Championship in Mississauga, where they met teams from Oak Ridges, Toronto High Park OPDL, North Mississauga OPDL, and Burlington OPDL.

Playing in the Western Ontario InterDistrict League, the Dorchester girls finished the season tops in their division with an impressive 16-0 record. They scored 115 goals overall and recorded 10 shutouts, including in the league Kick Off Cup.

In July, the team entered The Robbie Tournament in Toronto, one of the largest tournaments in Canada. There, they met teams from both Ontario and Quebec and, after three days of game play, the team brought home the prestigious gold medal.

Ontario Cup play started two weeks later, and the team traveled to Sault Saint Marie for round robin action. Competing against Soo City United, Burlington and Richmond Hill, the girls finished a perfect 3-0, which earned them a trip to the quarterfinals. Hosting Hamilton, they won that match and then traveled to Oshawa and defeated Erin Mills in the semi-finals.

Finals were set for September 14 at the Ontario Soccer Centre in Vaughan. The team faced Niagara Regional, and they ended up with a 2-0 win to bring home the provincial title. A prestigious honour, to be sure, as the Ontario Cup is the largest tournament of its kind in Canada (in its 104th year of play). Congratulations to all the U13 girls!

By Tanya Nolte and photo by Martin Bazyl Photography