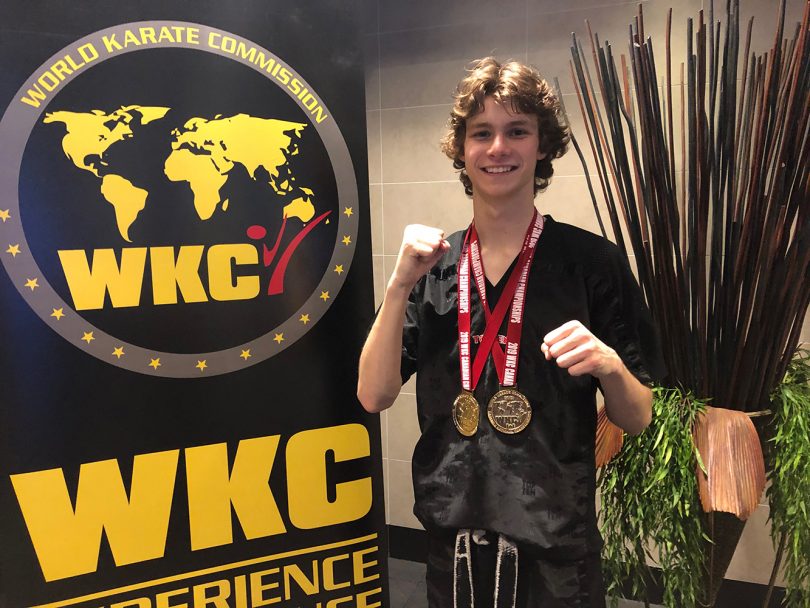 Sempai Nathan Parker is a well-decorated member of the Family Karate Competition Team, having won national titles and medals at the prestigious Irish Open

In addition to working with Mr. Marshall, Parker has had the great privilege of working with world-class athletes and competitors, including Trevor Nash, Jeff Smith and Mike Levy – all of whom are multiple time World Champions. During his training, Parker has achieved many awards, such as a WKC World Championship in Team Point Fighting in 2017, as well as multiple national titles in Point Fighting and Continuous Fighting, and a bronze and silver medal at the Irish Open (widely known as the largest karate/kickboxing tournament in the world) in 2018.

Along with competing under the Family Karate Competition Team (FKCT), Nathan is a coach of the team. He shares his duties with Sempai Jake Lindsay and Sensei Tina Hough. Parker’s overall determination has now landed him a volunteering spot at Kids Kicking Cancer in London. He is still continuing his training and will be competing in his fourth WKC World Championship event in November in Niagara Falls, New York. Parker will continue training hard this winter in preparation for his return to the Irish Open in March 2020.

Sempai Jake Lindsay is a 17-year-old second-degree black belt who has been learning, studying and competing in martial arts for over 10 years. Along the way, he has traveled across Canada, the United States and even to Europe.

Lindsay has won multiple national and world championships, and he has been competing at a world-class level for many years, winning his first world championship in point sparring in 2015 at the WKC World Championships in Orlando, Florida. He competed at the Irish Open in 2018, where he earned two bronze medals and a silver medal.

Meanwhile, Lindsay has also been interested in competing in the Olympic style of karate, and he earned a spot on Team Ontario after just one year of competing. The World Karate Federation (WKF) is the largest international governing body for the sport in the world, with 191 countries involved. Earlier this year, Lindsay competed in Edmonton at tryouts for the WKF Canadian team. He fell just short of moving past the quarterfinals, but he bounced back in a big way with a gold medal in classical kata and hard style kata at the WKC National tryouts.

Jake has been coached by multiple world class competitors, including his head instructor Renshi John Marshall, the owner of Family Karate, who has trained him since the beginning. Along with other instructors at Family Karate, Lindsay has also been coached by Trevor Nash, a multiple time world champion and one of the biggest names in the sport. Most recently, Lindsay has been training with Keith Weston, one of the most influential Canadian competitors in the WKF. Meanwhile, as he continues to grind away and improve his skills, Lindsay has also given back to his community, working as a head instructor at Family Karate Centres and volunteering for the Kids Kicking Cancer organization.