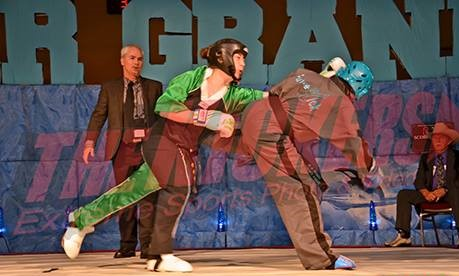 Emma Levy began her training back in 2002, at the age of 5, with John Marshall at Family Karate. From her first day, Levy had a focus and drive beyond her years, listening intently to her instructors. Some instructors would comment that Emma was like a ‘remote-controlled student.’ You would tell her to do something, or to fix something, and she would do it! Levy sought to challenge herself by joining the competition team, and she went from competing at local and regional tournaments to national level tournaments by the age of nine.

In 2015, Levy traveled to Orlando to compete at the US Open, where she won her division. Then, she earned a runner-up position out of all divisional winners. Her competition career took her to tournaments in Sacramento, Washington, New York, Pittsburgh, and Chicago. She competed and trained while maintaining a high academic standard and earning acceptance into the engineering program at McMaster University in Hamilton. This did not stop her from training, as she went to Dublin in 2016 and 2017 to compete in the Irish Open – one of the largest sport martial arts tournaments in the world.

During this intense period of training, Levy still found time to act as a coach for the competition team at Family Karate, giving back to younger competitors. She is set to graduate in June from the Civil Engineering program at McMaster, where she has spent the past four summers helping to run and oversee STEM camps on campus.

Whatever the future brings, Levy will always take the lessons she learned at Family Karate with her as she forges ahead in her personal and professional life. Lessons like perseverance, dedication, compassion, and teamwork.