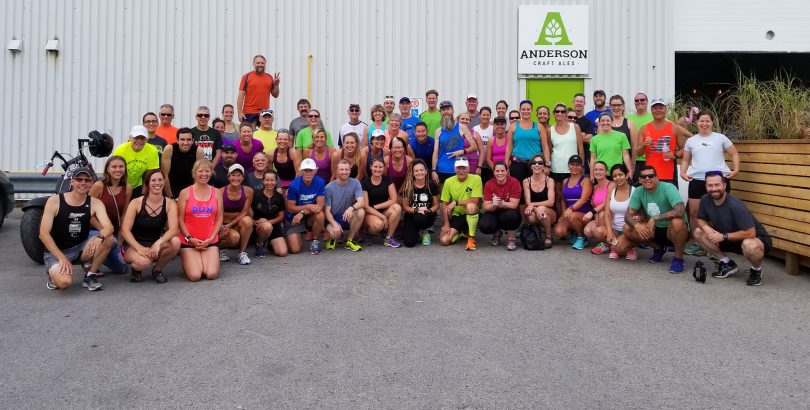 A pre-run shot of the running group at Anderson Crat Ales brewery. All those in bright green shirts had already completed six runs to earn their free running group t-shirt.

Their beer is well known in London. But there’s an aspect of Anderson Craft Ales that many people are unaware of: they have a running club. That’s right, the family-owned craft brewery, which opened back in 2016, has been operating a running club for almost as long – and more than 800 people have participated along the way.

The running club has been on hiatus for awhile due to distancing measures for COVID-19, but Anderson Craft Ales is looking forward to the days when the group can return to hit the pavement while enjoying each other’s company – and maybe a beer or two at the brewery afterwards.

“I think the main appeal is the social side,” says Gavin Anderson, who founded the family-owned craft brewing company with his father, Jim. “People can run their own pace and their own distance and meet up at the brewery when they’re done for a beer or two. I know several groups of friends that have been formed by our run club.”

When in operation, the club runs every Wednesday at 6:30 pm. There is no cost – or obligation – to participate, and the club is open to people of any skill level or ability. The idea is for people to come out, get a little exercise, and have some fun.

The main force behind the running club is Amanda, Gavin’s wife, who began running shortly after the couple met and who now regularly participates in 5K races (and the occasional 10K). Amanda checks in all of the runners and leads the group.

“We encourage people to participate every week with some small milestones,” says Anderson. “After participating six times, you receive a free running club t-shirt, after 24 times you receive a stainless steel water bottle, and after 100 times there is a small celebration and your name goes on a plaque in the brewery.”

To date, nine runners have passed the 100-run marks, says Anderson, including Chris Hendricks, the first, who was managed to do it in 100 consecutive weeks!

Anderson says the group will be active whenever provincial and municipal health guidelines allow for it – and with safe measures in place to keep groups of runners maintaining appropriate physical distances. To date, more than 800 different people have participated in the group at least once.

“The atmosphere within the group is very friendly and welcoming,” Anderson says. “One of our primary goals with our brewery is to promote community, and I think the run club has been a very successful way for people to meet each other and break down barriers.”