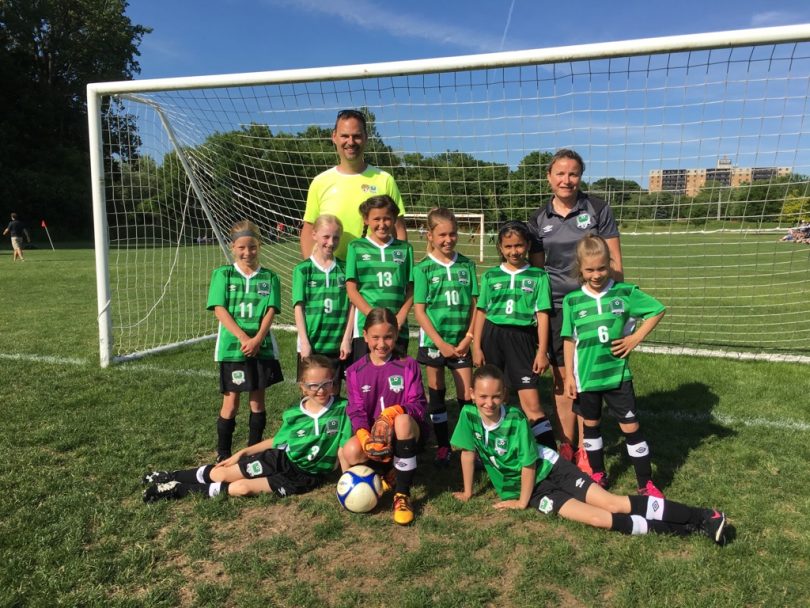 Anticipation is key on the soccer pitch. Just ask the NorWest U10 Girls soccer team (also known as the ‘Growling Gators’). This NorWest team, which plays in Tier 2 in the Elgin Middlesex District Soccer League (EMDSL), works hard in practices and games on anticipating what might happen next on the field.

“It’s all about helping them so they can be in the right place and prepared to act at the right time,” says Morgan MacLachlan, one of the team’s coaches. “So, we’re trying to work on more positional soccer and how to be effective off the ball. We’re also working to keep possession of the ball and work it around the field more effectively.”

This is the first season of competitive soccer for the girls on NorWest’s U10 team, which plays their games at the North London Athletic Fields. But they’ve really risen to the occasion, their coach says. In fact, after losing their first game, they tied a match before winning four games in a row to really get rolling.

“We’re hoping to keep the strong play going,” says MacLachlan, who, along with Carl Bonello, has coached this group of girls for the past three years, starting when they were U7 Rec Girls at NorWest. Maclachlan herself has played the game for 36 years, and she continues to play in the women’s league for the East London Soccer Club.

Besides their talent on the field, what’s the biggest strength for the NorWest U10 Girls team? The ‘Growling Gators’ have a fantastic team dynamic, as they’ve really come together as a team in their years playing together.

“The girls all really get along well, and the desire to succeed is consistent and very evident in every player,” says MacLachlan. “These girls are great all-around athletes who know how to finish by putting the ball in the net.”

Contributions by Morgan MacLachlan and photo by Sarah Hines