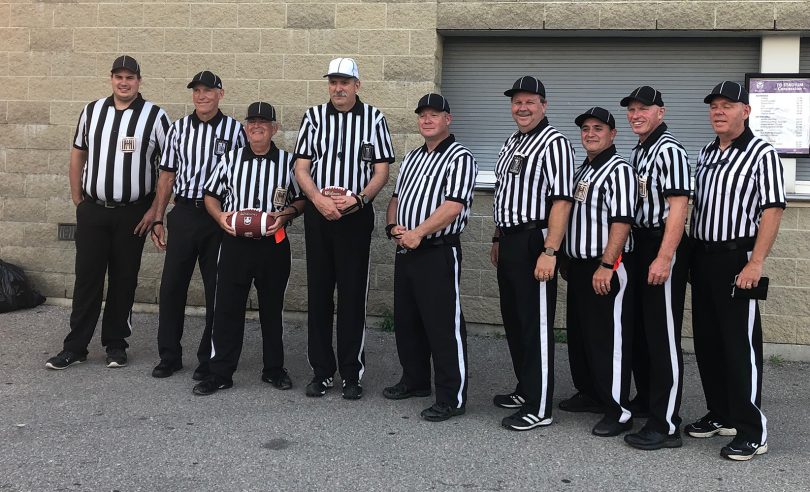 The London Football Officials has been around since the 1950’s and serves all tackle football in the city of London. Our clients include London Minor Football, High Schools, competitive summer leagues of all ages, and Canadian Junior (Beefeaters). We also support Western University with off-field officials.

Our goal is always to work with our customers to make the game of football as safe and fair as possible. We have members with all types of experience – from people who have never played the game to ex-Canadian Football League (CFL) players.

Being part of the London Football Officials is truly a great way to stay part of the game when your career as a player is over, or if you’re a fan and looking to learn all aspects of the game. After all, officiating offers the best seat in the house. Getting started is easy, and you can contact Trevor Semple at tsemple@uwo.ca to learn how to get involved.

We train hard, and football officiating is a year-round sport for us. Our biggest challenge, like all sports officiating, is recruitment and retention of younger people and former players.

Why is that so? Unfortunately, one of the reasons is a growing culture that has allowed parents, spectators, players and coaches to feel it is okay to abuse and be overly critical of officials – without having walked in our shoes. We have been yelled at – on and off the field – and have even been victims of threats of violence. No wonder it can be difficult to attract young people to officiating – in any sport – when the pay is the same as working at a fast food restaurant and the experience includes being yelled at.

We have recourse (including penalties) for abuse when it comes from the coaches and players, but when a parent literally follows an official to their car yelling threats and insults, the only penalty, sadly, is to lose that official. This is not okay, and no official should have to put up with that. We need a societal shift in the way people are treated on the job.
In the officials’ case, that job is calling games to the best of one’s ability. Our officials are trained and work very hard to better themselves and their craft.

We’re hopeful that the culture shifts in the other direction following the COVID-19 crisis when sports leagues get back underway, and that officials are treated with more respect and dignity. And we’re hopeful that more young people choose to pursue officiating as a way to be part of the great game of football.

We have had so many talented and great people as part of London Football Officials, and we’re excited about the future and the next wave of talent to take over the reins.