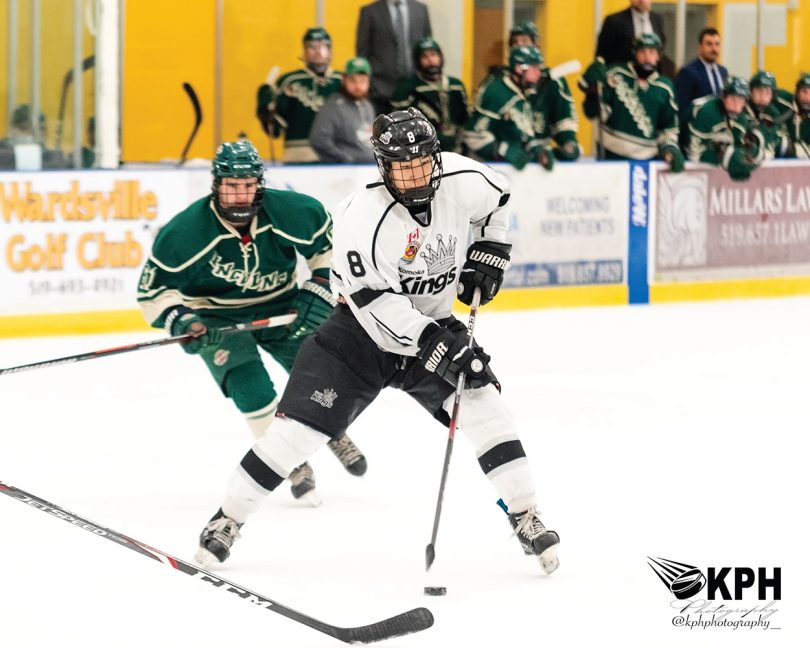 The Komoka Kings – and the entire hockey world and society as a whole – came to a sudden hibernation in early March. Although it was hibernation only from active on-ice action, as planning for a new season begins as soon as the previous season ends. One of the first actions by Kings management was to promote Assistant Coach Colin Martin to the Head Coach position to replace Ron Horvat who had guided the team from behind the bench the past two seasons.

The GOJHL was able to complete the first round of the playoffs and hand out the league’s 2019-2020 season awards. Komoka Kings forward Dario Beljo was named a Western Conference First-Team All-Star, and Don Adams received the Kelly Hearn Award as Outstanding Volunteer.

Beljo, a Sudbury native, completed his second season with the Komoka Kings and was the team’s leading scorer with 31 goals and 27 assists in 45 regular season games. Dario was a 10th round pick by the London Knights in the 2018 OHA Priority Draft.

Don Adams has been the Komoka Kings’ Promotions Coordinator for the three years the team has been in Komoka. He has worked tirelessly in seeking community partners and organizing promotions to make the Komoka Kings games an exciting event and enjoyable for all the fans.

For the Kings’ last regular season game, Don and his team of hard-working volunteers arranged for a memorable event for the Kings players who were finishing their last year of eligibility, including D’Arcy Panziera and Dowson Zheng, who each played three seasons with the Kings, and Austin Maietta, who joined the team mid-season from Markham.

The Kings look forward to next year!