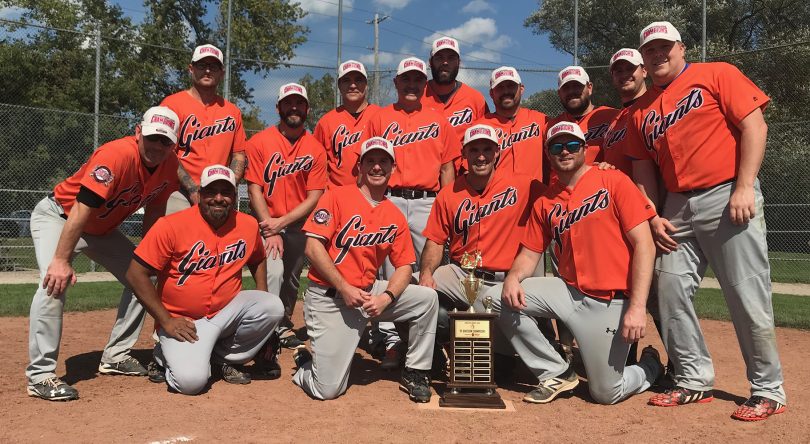 The LMBL’s long-time Giants (shown here after being crowned B champs in 2019) are undergoing a facelift for the 2020 season and beyond, renaming and rebranding themselves as the Brewers! Now, they’re looking forward not only to baseball, but to don some new snazzy uniforms.

Change is generally a good thing. Certainly, some change can be stressful. But, generally speaking, when changes occur, we learn to adapt and grow from the challenge that has been presented.

All of us have been recently affected by the changes to our family, work and even our sports environments.

The LMBL Giants decided for their 2020 season – and beyond – that they weren’t just going to make a small change but instead a complete overhaul – a brand new renaming of their team. Exit Stage left London Giants, we now present the London Brewers!

“The team has completely changed the roster over the last decade-plus,” says Daryl Badder, a 10+ year veteran of the Giants. “We felt it was time for a new identity. We feel the name represents the ideals of our team.”

Having some fun uniform options, Daryl noted, was an added bonus.

Why the Brewers? Brandon Campbell, the team’s shortstop, said, in jest, “A 30 and over league played mostly on Sundays without a team named the Brewers?! It just seemed wrong. You’re welcome, LMBL.”

If you spend any time with Brandon and hear the tone and cadence of this comment, you will of course laugh or at the very least chuckle.

Monday to Saturday can be crazy in any household. With the LMBL playing games on Sundays, it allows our players the flexibility to be family friendly.

“Sunday ball is a fun competitive league that doesn’t require any travel, is on a set day, and features a great group of people while maintaining a good play/life balance,” says RJ Milne, a second baseman with the LMBL’s Brewers.

The entire LMBL is hoping to play some ball in 2020 – but especially the Brewers, in hopes of breaking in their new threads very soon. And with the ‘Quarantine 15’ weight gain, let’s just hope they fit …

Story and photo submitted by LMBL