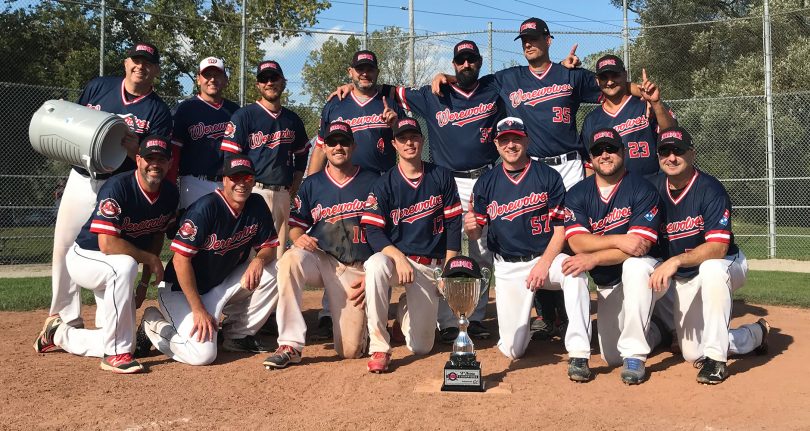 The London Mens Baseball League wrapped up their 2019 season on Sept 22 with three final games played under windy but dry conditions at Dan Pulham Stadium.

There were new champions crowned this year in each final, showing that anyone has a chance to take home some hardware from season to season.

The day opened with the B Championship at noon between the top two seeds in the B bracket, the Cubs and Giants. It was a close game, with the Giants capitalizing on some untimely mistakes by the Cubs. A sac fly, an error, and a bases-loaded walk contributed to all of the scoring, as the Giants took home the B Championship by a 3-0 score.

The second game of the day was the one everyone was waiting for, as the top-seeded Werewolves took on the #2 seed (and last year’s champion) Aquarium Services. It was another tight contest, with all of the scoring coming on some timely hitting in the third inning. The Werewolves jumped out to a 2-0 lead and never looked back, as they cruised to claim their second A Championship title in three years!

The final game of the day was the A Consolation between the Rays and Tigers. After jumping out to an early 2-0 lead, the Rays let the Tigers ‘claw’ back into it and tie the game at 2 in the top of the fifth. After suffering a loss in this game last year, the Rays weren’t to be denied in 2019 – they wanted those winning T-shirts! They scored one of their own in the bottom of the 5th and held on for a 3-2 victory!

Anyone 30+ is welcome to join our recreational baseball league – why not give it a try?  It’s the better alternative to slo-pitch! And more than one-third of our schedule is played at beautiful Labatt Park!

The LMBL is a drafting league, as all new players register as individuals and are allocated to the existing 14 teams in April through the league drafting process.  We do not accept team entries.

We are a recreational league, but playing experience is recommended. Players must be cognizant of their abilities, as baseball can be a dangerous game for those lacking the basic skills necessary. Our league ranges in age from 30-80+.

Registration for 2020 is now open. Visit our website for more information or to register: www.LMBLBaseball.ca