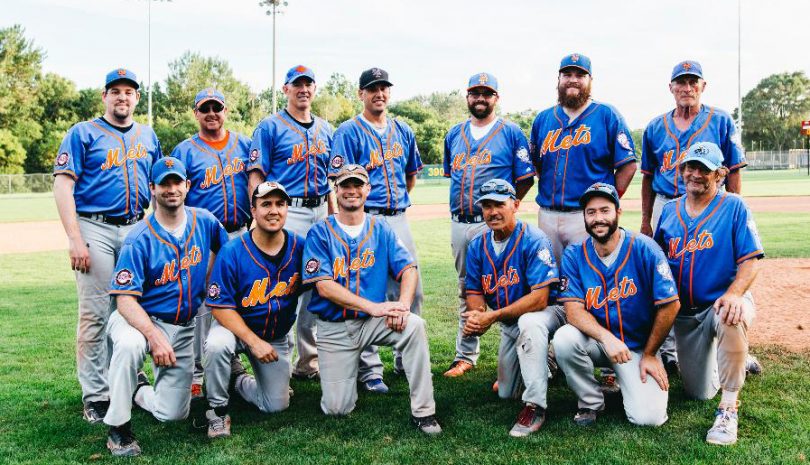 There is something special about being at the ballpark and playing the game of baseball. It always has been – and continues to be – a great sport that requires a varied skillset in order to be effective.

In the London Mens Baseball League (LMBL), the Mets are one of 14 teams that take to the diamond and compete each week throughout the summer. Formerly known as the Astros, the Mets have existed under this name for the past four years.

Following the leadership of player/coach Brad Nuttall, the team has steadily improved each of the past four years – not only in the win/loss column, but also in their level of compete on the field. Brad, who is affectionately known as ‘Nutsy,’ notes: “We play hard, but we leave it on the field. The post game BBQ’s and diet colas are also great team builders.”

When the Mets were asked ‘Why baseball?’, the resounding response related to the joy of the game and the social element that baseball provides.

League standout, Dan Skinner, responded, “We play for fun and to enjoy summer.”

In Jeff Green’s viewpoint, “It’s for the competition, but more importantly to hang with a great bunch of guys.”

Bob Pearson’s summary was to the point: “It’s more fun than not playing,” he said.

The Mets prove that baseball is a game for all ages, as they showcase players whose ages are between 30 and 82!

With next season just around the corner, the Mets look forward to the opportunity to relive their glory days and get back in the swing of things with the great game of baseball!

About London Mens Baseball League
The LMBL is a drafting league, as all new players register as individuals and are allocated to the existing 14 teams in April through the league drafting process. We do not accept team entries.

We are a recreational league, but playing experience is recommended. Players must be cognizant of their abilities, as baseball can be a dangerous game for those lacking the basic skills necessary. Our league ranges in age from 30-80+.

Registration for 2020 is now open. Visit our website for more information or to register: www.LMBLBaseball.ca