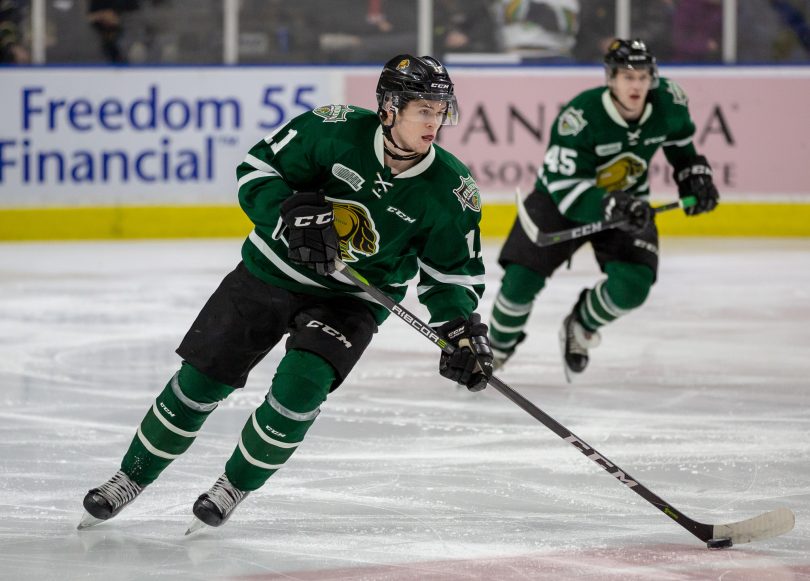 Connor McMichael was chosen by the Washington Capitals with the 25th pick overall at the 2019 NHL Draft, which was held June 21-22 in Vancouver, BC.

As the NHL season came to an end and the St. Louis Blues were crowned Stanley Cup Champions, the league swiftly turned its focus to the future and the new crop of talent waiting to realize their NHL dreams. The 2019 edition of the NHL draft took place June 21 & 22 in Vancouver, British Columbia and saw over 200 junior hockey players from around the world drafted by NHL teams. As the draft unfolded, two London Knights were selected, as their dreams became reality.

A former first round pick in the OHL Priority Selection, McMichael had a slow start to his OHL career (just 16 points). However, the Ajax, Ontario native proceeded to prove all his doubters wrong with a monster sophomore season, finishing with 72 points (36 goals, 36 assists) to lead the way among all Knights who played with the team all year (overager Kevin Hancock, who joined London from Owen Sound, was tops in scoring overall). McMichael’s play, and his consistent praise by many NHL scouts as the smartest player in the draft, rocketed him up NHL prospect rankings (he finished the year ranked 24th by NHL Central Scouting).

Come draft day, McMichael didn’t have to wait long to hear his name called. The Washington Capitals made him their first pick (25th overall). The Capitals have drafted many players Knights players in the past – most notably, John Carlson and Tim Taylor. Washington is also where Knights head coach Dale Hunter spent most of his playing career in the NHL (and returned, in 2011-12, to serve as the team’s head coach).

This past season was Matvey Guskov’s first in North America, as he’d spent his entire life in Russia prior to this past fall. He was a prominent offensive threat across Russia’s junior leagues, and while playing for his home nation internationally, including at the World Junior A Challenge last fall. The Nizhnekamsk, Russia native, who was a highly touted international prospect, was the Knights’ first round selection (42nd overall) in last summer’s CHL Import Draft.

Guskov found instant chemistry with McMichael and Nathan Dunkley, notching his first OHL goal and adding two assists in his first OHL game. Despite the fast start, however, time spent away from the team plus injury trouble prevented Guskov from having the season he’d hoped for. He finished the year with only 30 points (12 goals, 18 assists), which was still good for second in team rookie scoring. Guskov has a ton of offensive upside, and London fans can attest to his love of putting the puck in the back of the net.

In the fifth round with the 149th pick, the Minnesota Wild selected Guskov. This was the second time in three years the Wild selected a player from the Knights (they took Jacob Golden 147th overall in 2017). Guskov joins only a handful of former Knights to join the Wild – including Golden, Dante Salituro, Kyle Quincey, and Dan Fritsche.

By Greg Parkington and photos by Matt Hiscox Photography