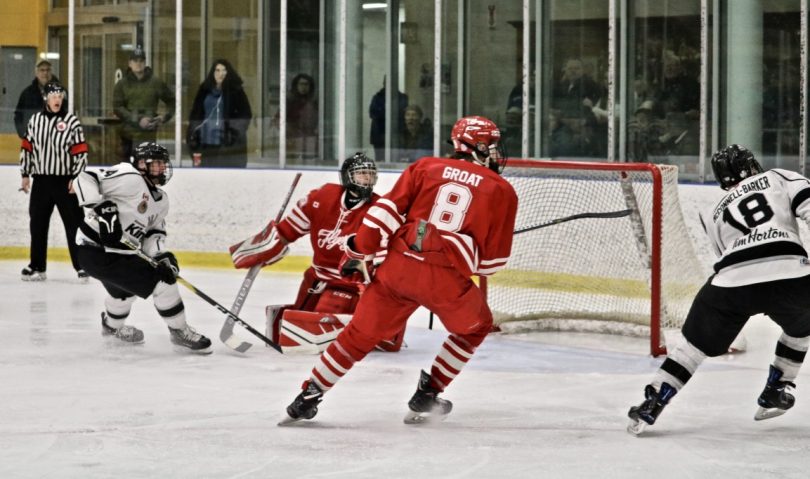 The sixth-seeded Komoka Kings enjoyed a successful postseason run in 2018-19, winning their first series and nearly knocking off the top-ranked Leamington Flyers in the Western Conference semi-finals

The Komoka Kings had a good run during this year’s GOJHL playoffs, making it to the Western Conference semi-finals for the first time in their 21-year history.

The Kings opened the postseason with a best-of-seven series against the Chatham Maroons, which started back on February 28. There was no love between these two teams during the regular season, during which the Maroons finished in third place in the conference while the Kings were sixth.

The Kings took a more aggressive style of game into the playoffs, and it quickly translated into a 2-1 win in their first game against the Maroons. Despite being the underdogs, the Kings went on to win the opening-round playoff series four games to one.

It was an outcome not anticipated by the Maroons, whose lone win in the series came in Game 2, a 7-4 win in Komoka. But the Kings took the next three games, two of them in Chatham, to win the series 4-1 and move on to the semi-finals to play the first-place Leamington Flyers.

In that series, the Flyers flew out of the gates and took the first game from the Kings, 4-0, at home. Then it was off to Komoka on March 16, where the Kings put together one of their best games of the 2018-19 season. The Komoka team pulled out all the stops and handed the Flyers a 3-2 defeat to tie the series.

The Kings then went on to dominate the next two games and step ahead of the Flyers with a surprising 3-1 series lead. Sadly, the gas ran out of the tank, as the Flyers came back to tie and eventually win the series, 4-3, to move on to face the London Nationals in the conference final (there, the Nationals won their fourth straight division title).

“The boys knew this was the top team in our division, and they remained focused,” said Ron Horvat, the team’s head coach. “They executed everything as practiced and instructed. I’m very proud of the boys. They were a young team to get this far in the playoffs.”

“We’re proud of what the players accomplished during the regular season and the playoffs,” said Kings owner and GM Roop Chanderdat. “They’ve continued to grow together as a young team, and a fair number of the players will likely be returning next season, which will give us something to build upon.”

One of those players, Ryan McAllister, who was acquired late in the season, has accepted a full scholarship to play NCAA Division I hockey for the University of Michigan.

“We’re very proud of Ryan,” Chanderdat said. “We wish him well in his journey.”

Finally, the owner and GM also recognized those off the ice who helped the Kings achieve success in 2018-19.

“I want to thank all the fans and volunteers for their support throughout the season. The Kings have the best fans in the league, and we look forward to seeing everyone again next year.”

By Dave Ferguson and photos by Komoka Kings