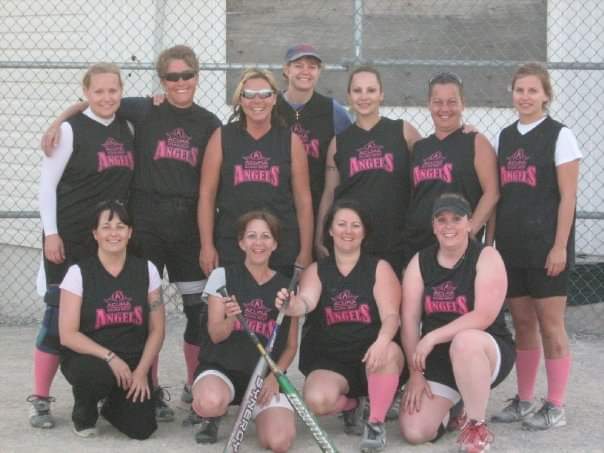 The Acura West Angels are celebrating 10 years this summer. Here, you can see the slo-pitch team in year 1 (left) and the newest version of the team – in 2019.

It’s a milestone year for the Acura West Angels, a ladies’ slo-pitch team that has now been in existence for 10 years! The team, which consists of players ranging in age from their 20’s to their 50’s, is a ‘mixed bag of talent,’ according to Linda Eckert, one of the team’s long-time players. Some have played for years, while others are new to the game. Regardless of tenure, the women all work together to improve – and they have fun doing it!

“Although the faces may have changed over the years, everyone maintains an ‘Angel’ status for life,” says Eckert. “It’s a sport, but you really become a ball family.”

The Angels play their games on Thursday evenings at Slo-Pitch City in Dorchester. Over the years, the team has won league championships, but the focus remains on enjoying some ‘downtime’ away from hectic lives – and having fun with friends.

The fun is fully endorsed by Paul Jennery, the general manager at Acura West who is always happy to sponsor the team each summer.

“We proudly take the field sponsored by Acura West London, and Paul supports us whole-heartedly,” says Eckert. “We’ve been fortunate to have called ourselves Acura West Angels for 10 years now with their support, and we’re looking forward for exciting slo-pitch action for years to come!”