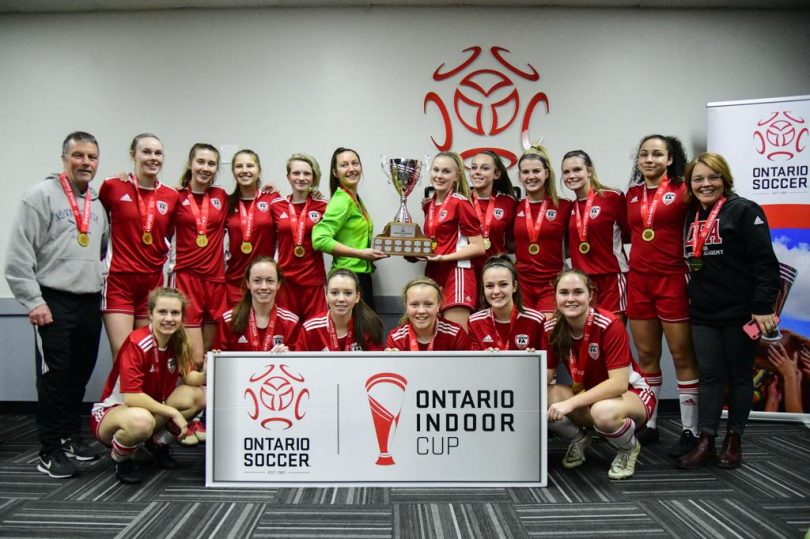 The NorWest (NW) Soccer Club is excited to welcome Coach John Fleming, and many players from the NW London Football Academy, back to NorWest Soccer this year! And we are proud to congratulate the U-18 Girls on their Indoor Ontario Cup title win in February, where they defended their crown and won for the second year in a row!

At the indoor championships at the Ontario Soccer Centre in Vaughan, goalkeeper Taylor Mitchener made four saves in penalties to help lift NorWest Soccer to the title over the Erin Mills Eagles.

Prior to the final, the U-18 Girls played a tournament round on the Saturday and a semi-final game on the Sunday. NorWest and Erin Mills met in the tournament round and drew 0-0. Making it to the semi-final, NorWest took on the North Mississauga Black Panthers, defeating them 2-0, while Erin Mills narrowly defeated Ottawa, 1-0, to advance to the final.
And it was an exciting final. The first half featured both sides carefully plotting out their opportunities and not allowing much on the offensive end for either team. Minus a few good chances that weren’t converted, both sides played a tight, conservative first half, which closed out with the teams knotted at 0-0.

The second half was more of the same as both sides pressed for an opener. Each side traded chances throughout the second half, but once again neither side could find a way through, and the game was sent to penalties to break the 0-0 deadlock.

In penalties, both keepers showed their best. Erin Mills’ goalie, Alexi Hryshko-Barry, made three saves but it was NorWest’s Taylor Mitchener who stood even taller, making four saves to lift the London team to their second straight U-18 Girls Ontario Indoor Cup title.