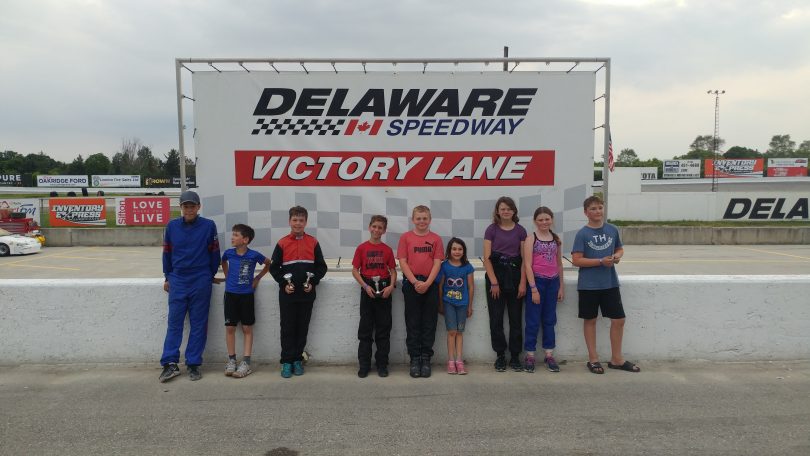 The Junior Racing League (JRL) at Delaware Speedway provides youth aged 8 to 17 the opportunity to learn all about stock car racing and compete in a safe and encouraging environment.

It was founded in 1997, and it’s still going strong. The Delaware Junior Racing League, sponsored by Krown Body Maintenance, is a program that teaches young drivers (8 to 17 years old) ‘the ins and outs’ of stock car racing in a safe and encouraging environment where growth and personal development are the keys.

The Junior Racing League (JRL), which runs throughout the summer on Wednesday nights, is divided into two divisions – the Junior Division (8-12 years old) and the Senior Division (13-17 years old). The cars, which are equipped the same as their full-sized counterparts, reach speeds between 40-50 km/h on Delaware Speedway’s inside road course. Instead of competing for money, racers compete for year-end trophies, which are handed out at the end of the summer (August 31), as junior racers and their families get together to celebrate the season.

This year, the JRL has 12 cars competing in 12 different events, with the drivers ranging in age from 7 to 15. The season began May 1 with an open practice, and races have been staged most Wednesday nights since. Spectator gates open at 6pm and racing starts at 6:30pm. Championship night takes place August 14.

While racing, the JRL drivers learn valuable life skills, including focus, communication, conflict management, stress management, and the ability to learn from mistakes. Meanwhile, thanks to a family-like atmosphere, the JRL creates lasting friendships for drivers – and their families.

What happens to graduates of the JRL program? Often, they can be seen in action every Friday night at Delaware Speedway. Others find themselves competing in the APC Series. In other words, the future is bright for JRL racers!