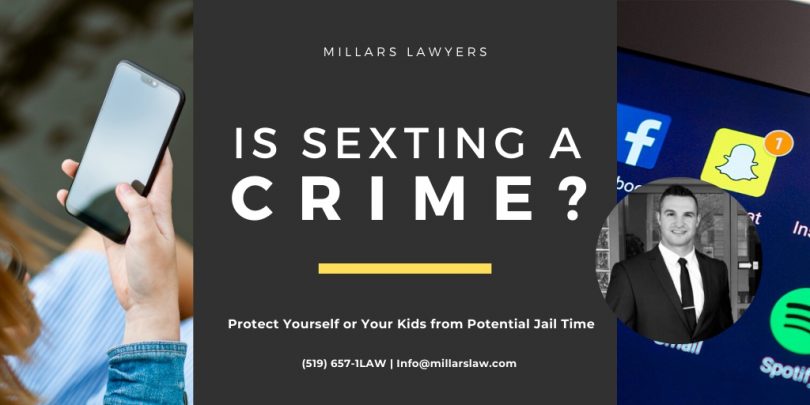 For the first time in 2012, the word ‘sexting’ was listed in Meriam-Webster’s Collegiate Dictionary.

Sexting is sending, receiving, or forwarding ‘sexually explicit’ messages, photographs, or images, primarily between mobile phones, of oneself to others.

If you, as a consenting party to a sexually explicit photo, video or conversation, transmit any content without the consent of the sender, you could be charged with the following:

62.1(1) Criminal Code of Canada
Every one who knowingly publishes, distributes, transmits, sells, makes available or advertises an intimate image of a person knowing that the person depicted in the image did not give their consent to that conduct, or being reckless as to whether or not that person gave their consent to that conduct, is guilty:
• (a) of an indictable offence and liable to imprisonment for a term of not more than five years; or
• (b) of an offence punishable on summary conviction.

Intimate Image Protection Act
Manitoba has an Act that protects and allows victims to sue the person who shares images or recordings which were sent with a reasonable expectation of privacy without the consent of the sender. It will not be long before Ontarians are protected by the same Act.

What if I’m under 18?
According to the Supreme Court of Canada in R v Sharpe, [2001] 1 S.C.R. 45, 2001 SCC 2 at para 115-118, there are limited situations where youth can express themselves by creating and keeping intimate images of themselves. The law will not normally get involved in situations where:

Keep in mind, youths, this exception only applies when consent is present from both people shown in the intimate image or video. Also remember that with today’s ever-changing technology, it becomes almost impossible to destroy something that has been created.

Any image or video of a youth under the age of 18 who is naked – in part or in whole – or is engaging in a sexual act is considered child pornography pursuant to s. 163.1(4) of the Criminal Code.

This means that a youth, under the age of 18, who is in possession of intimate images or videos of another person, could be charged with child pornography-related offences.

As an example, if a 15-year-old boy requested intimate images from his 14-year-old girlfriend, and then shared this content with his friends via Snapchat, Facebook or Instagram, that 15-year-old boy would be charged with the possession of child pornography (R v X., 2016 NLPC 81303).

Are you worried there may be intimate images or videos of you online? Here’s what to do:

If you think it is possible that someone may share intimate images or videos of you without your consent, you may request a Peace Bond from Criminal Court which will order the person NOT to share them. The Police may assist you with this. If the person does not follow this order, they are committing a crime and can be charged.

Think first before sending out intimate images or videos.

THE BOTTOM LINE: It may be difficult to establish consent if done outside message boards or in the company of people who may be called as credible witnesses, should you find yourself in a position where you are facing criminal charges. Classic examples include bad break-ups and friendship relationship breakdowns.
Be careful with whom you share your naked photos; it can lead you to JAIL and/or ruin your CAREER!

Call MILLARS LAW at 519-657-1LAW or e-mail at info@millarslaw.com today and speak with our lawyers for more information.