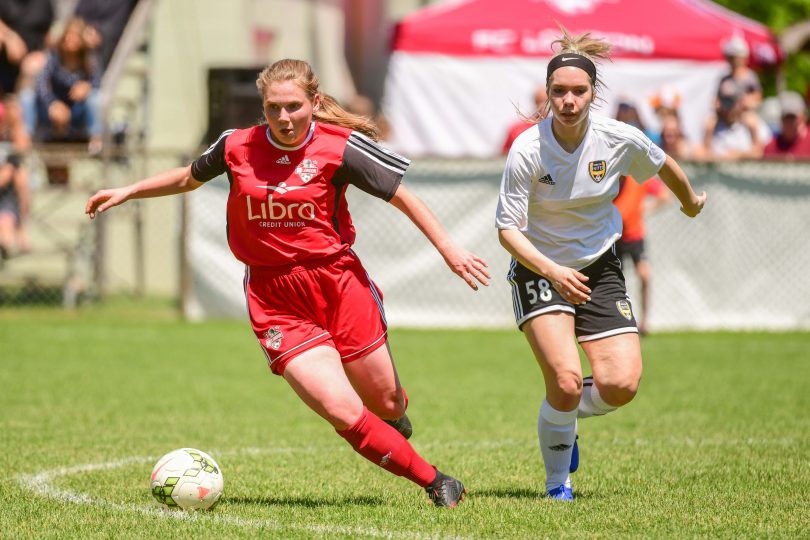 With teams from U8 through to semi-pro playing in the top leagues in Ontario, the London TFC Academy and FC LONDON clubs are well into their 2019 season. And with a variation in the playoff format for League1 this year, the pressure is on to stay at the top of the table for the balance of the year.

League1 Ontario is now owned by CPL (the Canadian Premier League), the long-awaited nationwide professional league which kicked off its inaugural season with a game in Hamilton this spring. As part of the new ownership, CPL is being very respectful of the college/university season and, as such, has compressed the league and playoff format to be completed by early September in sync with post secondary seasons. This year’s playoff format will see the top eight teams on the men’s side and the top six from women’s leagues compete for the honour of being crowned as league champions. On the men’s side, the winning team will join the Nutrilite Championship which is the preliminary round to a berth against MLS and international teams in the CONCACAF Champions League.

“The tighter season allows us to stay focused on a clear end goal,” says FC LONDON Head Coach Michael Marcoccia. “On the flip side, it means that keeping the team healthy is key to a successful postseason. Our ‘periodization’ model is key in maintaining a level of fitness throughout the season.”

Youth teams competing under the London TFC Academy banner in both OPDL (the highest development league for U13 an U14 boys and girls) and in OASL (Ontario’s top academy league) are practicing during the week and playing most weekends. Both OPDL and OASL are components of Ontario Soccer’s player pathway, and youth teams attend League1 games to get exposure to the highest calibre soccer in the area. With the Women’s World cup this year, there is lots of motivating teams, players and action on television and social media to keep enthusiasm high for raising the bar.

Through its affiliation with MLS 2017 Champions Toronto FC, the club continues to bring top-level coaching to the region. Affiliate clubs such as Strathroy Football Club, St. Thomas Soccer Club, and Lambeth Soccer Club all benefit from an increased level of professional coaching provided by Toronto FC coaches. For more information about the season, the rosters, schedule and tickets, visit www.fclondon.ca.