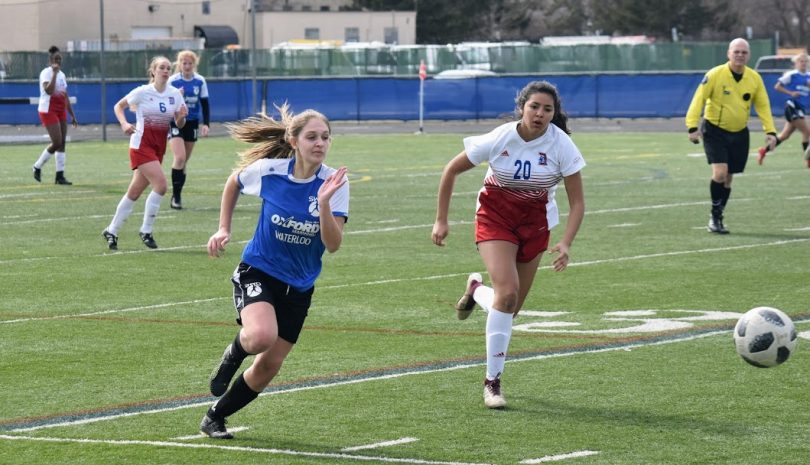 Vanessa Dredge, who plays for the U17 London Whitecaps and SWO Soccer Canada, is a talented soccer player who is being scouted by American college programs for potential scholarship opportunities.

A number of local female soccer players are catching the eyes of American college coaches who just might be interested in recruiting the Southwestern Ontario players for their programs south of the border.

Two such players include Vanessa Dredge and Belle Annis, who both play with SWO Soccer Canada, a training program made up of female student-athletes aged U16 to U18 from across Southwestern Ontario (the program helps female soccer players get noticed and possibly receive an athletic scholarship).

Dredge, who hails from Ilderton, is a member of the U17 London Whitecaps team, where she a starting striker. She has played friendly scrimmages against Oakland University, the University of Detroit Mercy (where she scored), Ferris State University, Delta State Jr. College and Madonna University.

“Vanessa is a physical striker who has great control and is deceptively quick with both feet,” says Kevin B. Johnson, the head coach of SWO Soccer Canada. “She has drawn interest from at least a few junior colleges.”

Belle Annis, meanwhile, has also piqued the interest of a few American college soccer programs. Also a member of the U17 London Whitecaps team, Annis played for the U16 London Marconi club last year.

“Belle is a centre midfielder who has quick feet and good footwork and is an excellent passer,” says Johnson. “She’s also a 90% + student-athlete.”