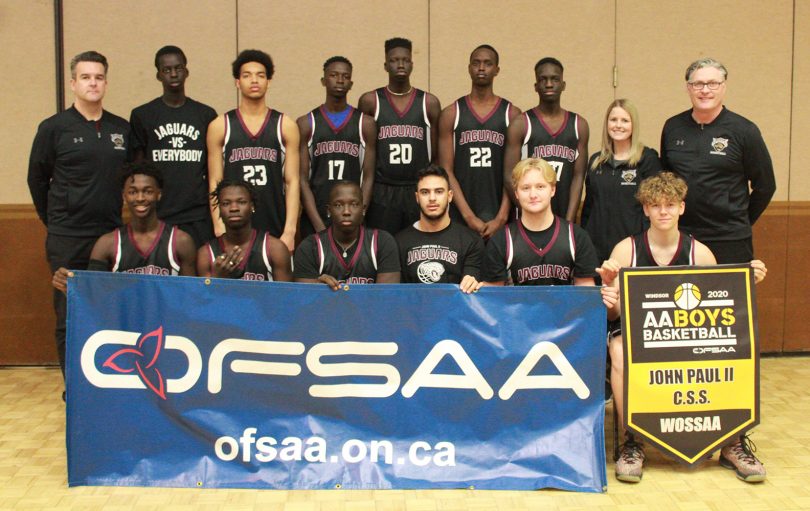 The John Paul II senior boys’ basketball team ended the season on a high note by winning the Consolation Championship in Windsor during the OFSAA Boys AA provincial championships in March.

During their 2019/2020 campaign, the team posted an impressive 35-9 record, including going undefeated in league play and winning LDA and WOSSSA titles. Since the inception of the LDA league, the Jaguars have competed in six straight league finals, winning three times. They have also added two WOSSA titles, an OFSAA bronze medal in 2016, and now the 2020 Consolation Championship.

The Jaguars earned a bid in the OFSAA tournament after earlier winning a WOSSA title at South Collegiate. Standout center Caleb Moses Dutt, a grade eleven student who missed WOSSA with an injured foot, returned to action in Windsor. The team often showcased five grade eleven students on the court, each of whom made significant contributions. Two of these players were honoured at the Edmonds-Lodge, Thames Valley Regional Athletics Boys Basketball All Star Game. Emmanuel Akot was presented with the LDA Mr. Basketball Award, and Brendan Mudge was the all-star game MVP. Graduating player Jean Paul Rokundo was presented with the LDA Ted Earley award.