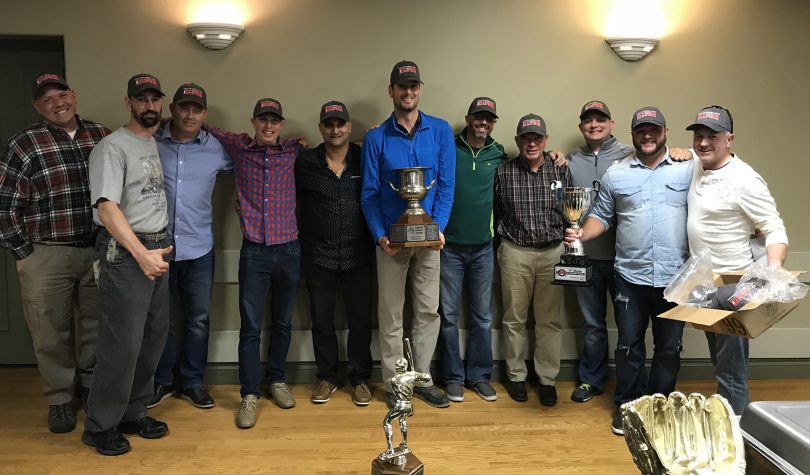 The 2017 LMBL champion Werewolves show off some hardware that they received at the league’s 2017 banquet.

Usually, this would be the time of year the LMBL would be celebrating another successful season and hosting our Annual Awards Banquet. This normally begins with several players and Executive members getting together for a pre-banquet round of golf at the Willows Golf and Country Club. That’s followed up with an amazing dinner, mingling between players, awards for top performers and Team Players of the Year, as well as a ‘State of the Union’ from our Executive and some great entertainment. Hopefully next year!

With no season to wrap up, we must look forward to the hope of playing in 2021. With Phase 3 opening in many areas, some baseball leagues were able to play a shortened and modified season this year. Based on this, the LMBL is hoping to have some semblance of a normal season in 2021. It will likely have certain COVID protocols in place for the safety of our players – and even more importantly, the safety of the players’ families. But at least we should play. Player safety will be a priority, since many of our players have partners, little ones, and not so little ones to care for away from the diamond.

From the last game of the season in 2019 until our first pitch of the year in 2021, it will be almost 600 days in between games. It’s likely that one of our league partners, Centrefield Sports, will be very busy with LMBL players – not just working off rust but working off the rust that’s on top of rust!

As we move into the holiday season, the LMBL would like to wish the frontline workers, our players, their families, and everyone in our community the happiest of holidays.

See you on the field … soon.