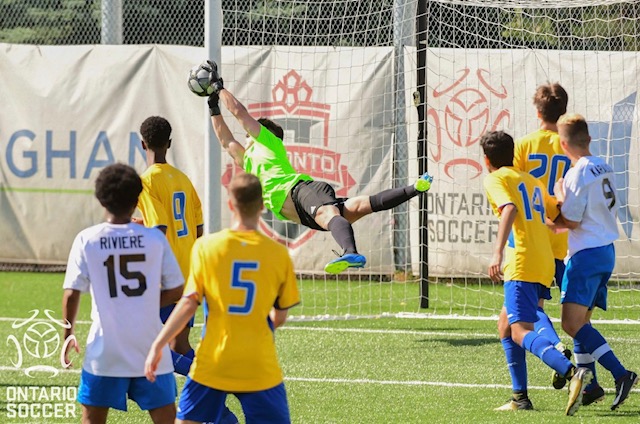 Dante Carraro, a London-born goalkeeper, won an Ontario Cup Championship last summer with the 2004 Boys Milton Magic team and earned a trip to the Toyota National Championships in Edmonton in the fall.

It was more than 10 years ago that a young Dante Carraro tried on his first pair of cleats and fell in love with the game of soccer. Through the Timbit league, and then eventually off to a more competitive environment, Dante would soon join a team within the London German Club Soccer organization. There, under the guidance of his coach, Dan Caslick, Dante settled in as a goalkeeper. The rest is history.

On Caslick’s recommendation, Dante tried out for and earned a spot on the now-2004 London TFC team. General Manager Dave DiBenedictis quickly took notice of Dante’s abilities, and he sent the youngster for his first Provincial Trial. Meanwhile, Carraro also worked many sessions with local goalkeeper trainer Mark Haynes. Dante made his first Team Ontario and then began playing within the OPDL with the Vaughan Azzurri.

There, Dante continued to sharpen his skills with keeper trainer Paolo Ceccarelli. The commitment meant long drives from London to Vaughan for practices and games, which added up to about 2,000 kilometres of driving each week.

Before the move to a Toronto-based team, Dante earned a unique opportunity, as his regular keeper trainer, Robert Stillo, mentioned that the 2004 Boys Milton Magic needed a keeper for a big showcase tournament in New Jersey. The head coach of the team, Shayne Griffin, invited Dante to the event, where the team finished an impressive second place. And it was at that tournament where Dante’s natural connection to the team would later inspire him to make the Milton Magic his home.

After an undefeated season in league play, and after allowing no goals in the Ontario Cup preliminary rounds, quarterfinals, semifinals and even in the finals, Carraro and the Magic earned their first Ontario Cup Championship. That earned them the chance to compete in the Toyota National Championships in Edmonton in October in the under-15 age group. There, the Magic performed well once again, earning a fifth-place finish in the country.

It was a remarkable season, indeed, for the young goalkeeper, and the future is bright for Carraro as he continues to pursue his soccer dreams.