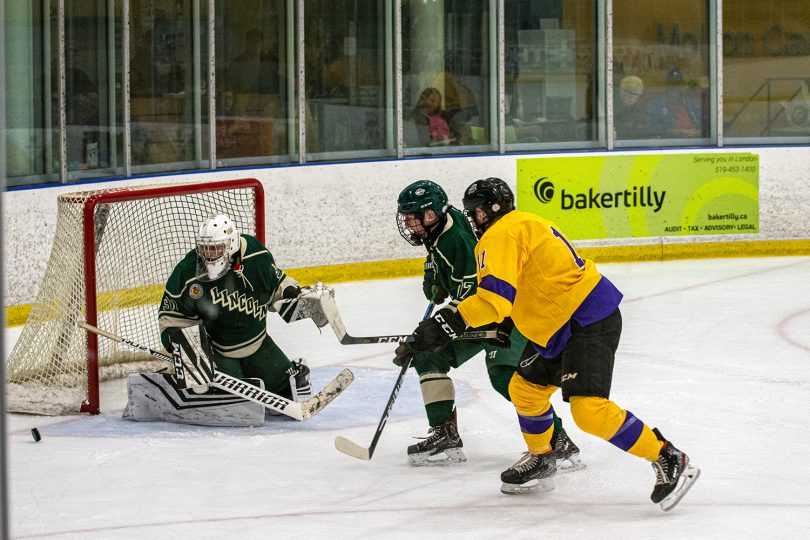 Toby Rizzo vs. St. Marys during a September 27 game

The Komoka Kings opened the 2019-2020 season with a 5-0 shutout win at home September 14. That followed a 1-1 record at the GOJHL Showcase in Pelham (vs. the Hamilton Kilty B’s and Kitchener Dutchmen). In other words, it was a good start for a team with 13 returnees and eight new recruits that finished sixth in last year’s Western Conference standings and took the first-place Leamington Flyers to 7 games in the semi-finals.

In addition to experienced head coach Ron Horvat and sophomore assistants Colin Martin and Michael Reati, the team’s conditioning is enhanced with the services of Precision Fitness & Performance Centre. PFPC offers a weekly in-gym program to maximize strength and power development, build mobility, and aim to decrease injury occurrence. Periodization of the programming allows the players to avoid burnout and emphasizes recovery for the long season.

Team management and players participated in the National Forest Week Launch Party, sponsored by Robinson Mitsubishi, on September 23. Meanwhile, several players participated in the Mentor Safety Consultants Skills Competition at the Delaware Lion’s Park on Sept. 29 – in support of the Leukemia and Lymphoma Light the Night fundraising. Meanwhile, poster child Paige was on hand to do the ceremonial puck drop at the Sept. 28 game vs. the St. Marys Lincolns, where the Kings introduced their new third jersey (gold with purple trim).

Goaltender Grant Linville, who has travelled the furthest from home to join the Komoka Kings, says his first experience with hockey in Canada has been “awesome,” and that’s he’s “thankful for the opportunity to play in a great hockey area.”

Finally, the Komoka Kings have also formed a presence on Hockey TV, with young Dylan Baker taking the mic.