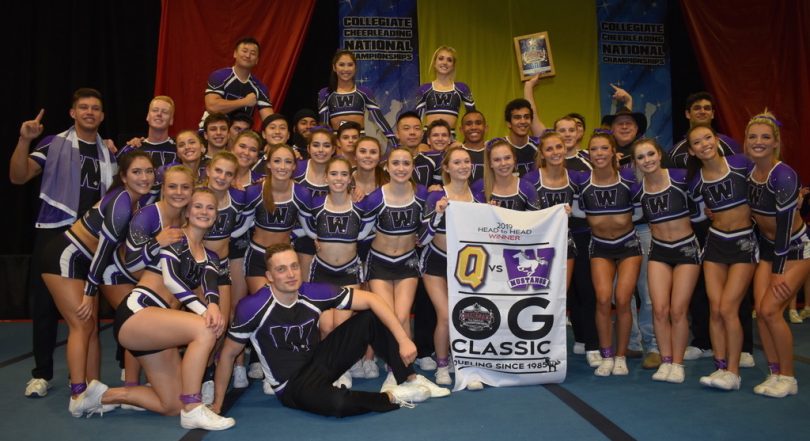 The front half of the PCG season had the collegiate teams in high gear leading up to the Power Cheer Collegiate Nationals in Toronto in December. Power Cheer Gym is home to three of the top competitive programs in Canada. The 22-member Fanshawe Black Falcons continued their impressive record, punching above their weight class in the ‘University’ Small Coed category, coming home with their second consecutive 2nd-place finish in the past two years.

In what is arguably the most competitive and populated division at Nationals, Western’s 36-member All-Girl squad also finished second, just a hair behind the University of Guelph but ahead of their archrivals from Laurier. In the event’s premier crowd-pleasing division (Large Coed), the Mustangs put on an impressive air show that not only earned them the win, but also produced the highest score at the Nationals. The Mustang squads head to Montreal for their next competition in February. Coaches remind all incoming high school graduates and ex-gymnasts looking for a team to contact PCG well in advance of next season.

Junior National Team Short List
The PCG elite International Junior program, ‘Red Ops’, was selected as one of the three finalists in the Canada-wide search for the next team to represent the country at the ICU Junior World Championships in April. Last year, Red Ops from London’s Power Cheer Gym combined with athletes and coaches from Sarnia’s Bluewater Cheer to earn Canada a silver medal at the World Championships.

All-Star/Club Cheer Teams
The bulk of the Ontario club cheer team season runs from January through April, and all of the PCG teams hit the circuit after returning from the December holiday break. Teams range in age and ability from Mini (ages 5-8) through Youth (6-11), Junior (10-14) and Senior (14-18). It is not unheard of for certain athletes and crossover sport kids to join a team – even in the second half of the year. Call to discuss possibilities and openings. The Winter Recreational classes are also open to novices aged 3-12 starting in January.

The Academy Circus School
The Academy held their Holiday Circus Show in December with a full house in attendance. We offer classes for all levels, beginners to elite athletes, and new sessions start in January and run until May. Email meaghan.coaching@gmail.com for information on our acrobatic / contortion / aerial (hoop / silks) / heart / trapeze / anchor / tumbling / dance classes and more! Follow @theacademycircus on Twitter.