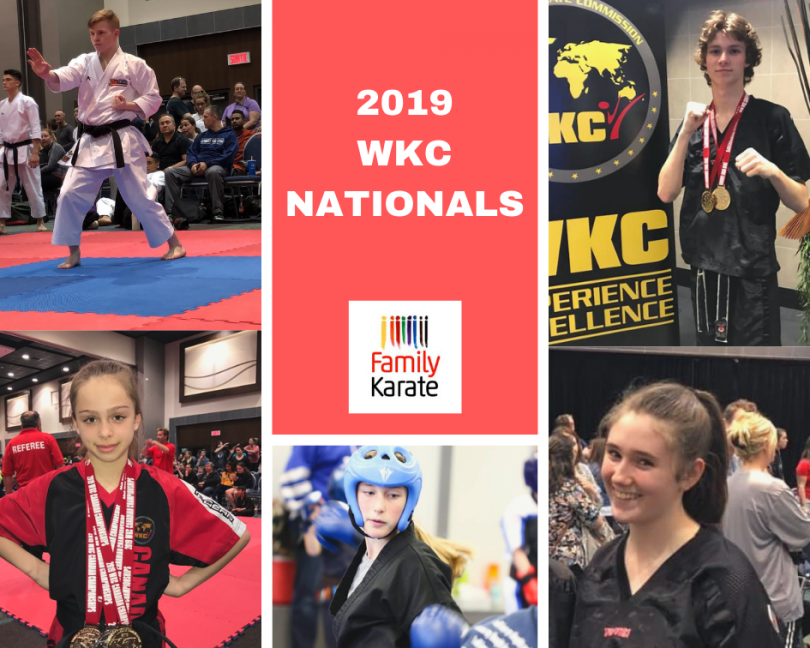 It was a highly successful trip to the WKC Canadian National Championships in Gatineau, Quebec during the May long weekend for Family Karate Centres. Five local athletes competed, and the club earned qualifications to the World Championships in November.

The Family Karate Centres’ Competition Team enjoyed a successful trip to the WKC Canadian National Championships in Gatineau, Quebec on Victoria Day Weekend. The Palais des Congrès hosted the prestigious event, which featured Canada’s best martial artists competing for a spot on the National Team – and the opportunity to represent their country at the WKC World Championships this fall.

Nine-year-old Athena Papadatos won gold in Girls (10 and under) -30 kg Light Contact Continuous Fighting, silver in Point Fighting, bronze in Classical Kata, and fifth in Hard Kata, earning her a spot on Team Canada for the third consecutive year.

The 2019 edition of the WKC National Championships were the biggest and best yet, making them the most competitive Team Canada tryouts ever. Preparations for Worlds are well underway, with all of the FKC qualifiers resuming their intense training upon their return from Quebec. We look forward to cheering on our Team Canada members when they compete at the World Championships in Niagara Falls, New York in November!