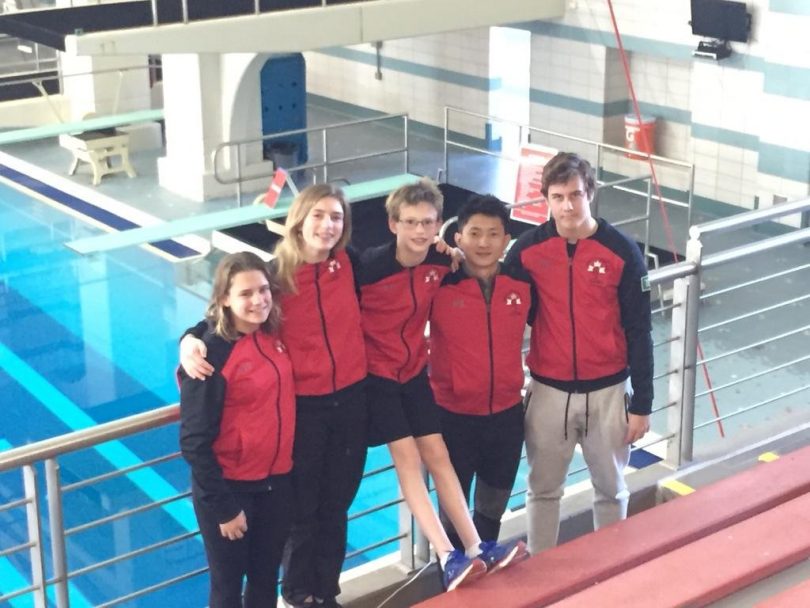 A group of Forest City Diving Club athletes (aged 13 to 17) traveled to Oxford, Ohio to compete in an invitational meet at Miami University, where they fared well while competing against high-level talent – including some Chinese national champion divers.

The Forest City Diving Club (FCDC) competed in its first of three provincial meets in Windsor, Ontario at the end of November, as eight national-level athletes – and two coaches – represented the club at the event.

These meets serve as qualifiers for the Canadian junior national championships. Three of our divers achieved a qualifying score, and two divers achieved full qualifying scores for Nationals. Alexa Fung set two provincial records for her age group. What a great start to the year for these young athletes and their coaches, Wing Hu and Luda Zakharenko!

The Windsor event, meanwhile, was also a qualifier for an International competition in Madrid, Spain, and Abbigail Haygarth of FCDC earned the right to represent Ontario at this international event! (Katelyn Fung, a former FCDC diver who now trains in Toronto, is also heading to the Spain event after earning four medals at the Junior Pan Am Games this past summer).

In December, four of our national-level divers (aged 13 to 17) and Coach Wing travelled to an open invitational meet at Miami University in Oxford, Ohio, where they competed against a 12-team field that included a mix of university diving clubs and other prominent clubs – including the Guangdong Diving Club from China.

Attending this international event was an amazing experience for our divers. They competed against accomplished international athletes, including some Chinese national champions. The memories and experiences they brought back will help our young athletes develop – both as divers and individuals.
For more information on our ‘learn to dive’ and competitive programs, please visit our website at: www.forestcitydiving.com.