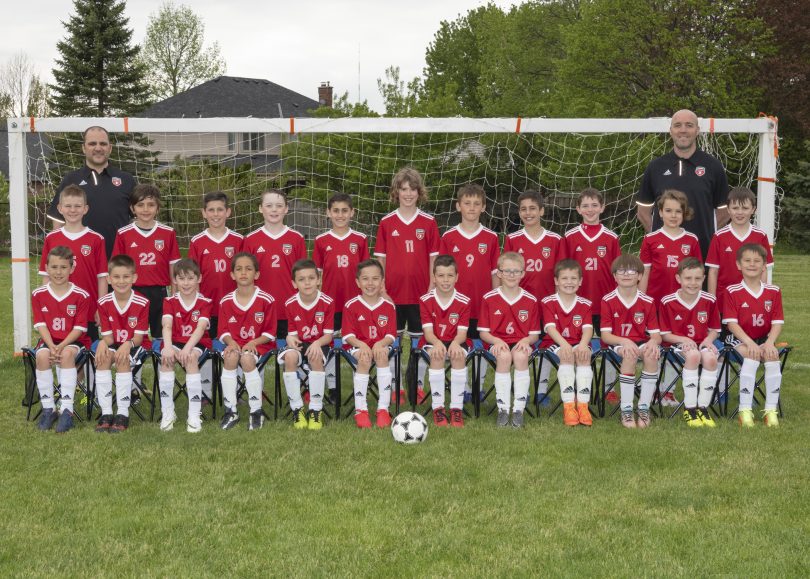 They’re a team in the truest sense of the word. Despite the fact that the majority of team members on the Oakridge Fire U9 Boys soccer squad hadn’t played together prior to this season, they quickly developed an overall sense of comradery, and as a result play as a unit, all working towards the same goals.

“The kids genuinely enjoy each other’s company, and it shows on the field with their teamwork, effort, and willingness to help each other,” says Anthony Strangio, the Oakridge Fire U9’s head coach.

The Fire is comprised of 24 players who play in both the Tier 1 and Tier 2 U9 (2010) division in the Elgin Middlesex District Soccer League (EMDSL). The team’s home organization is the Oakridge Soccer Club, and they’re based out of Hazelden Field. Their coach says the team, which is sponsored by Dominic’s Auto Service, has been focused on grassroots skills development all year.

“We continue to work on ball control, positioning, effective passing, and spatial awareness,” says Strangio, who is in his fifth year coaching soccer. “Our coaching group, which also includes Ian Cunningham and my brother, David Strangio, continues to target areas that need improvement. Overall, our goal is for the kids o have fun and learn the game at each and every match and practice.”

The Oakridge Fire U9’s have been taught and encouraged to celebrate the ‘little’ accomplishments. That may mean a good pass, a good strike on net, or a great save. It may be different for each player, but the important thing is to celebrate improvement and success.

The team has registered for two festivals this summer and is looking to fare well at both, says Strangio, who also helps coach his other two boys’ teams, an U8 and U5 squad. Growing up, the coach played competitive and high school soccer into his teenage years. Now he’s focused on developing the skills of the next generation – including the players on the Oakridge Fire U9 squad.

“At every session we have, our players have the opportunity to both celebrate accomplishments and work on areas in need of improvement,” Strangio says. “As our team members continue to get comfortable with each other, as well as learn each other’s strengths and weaknesses, I look forward to seeing them rise to challenge the strong teams that I know we’ll face this season.”