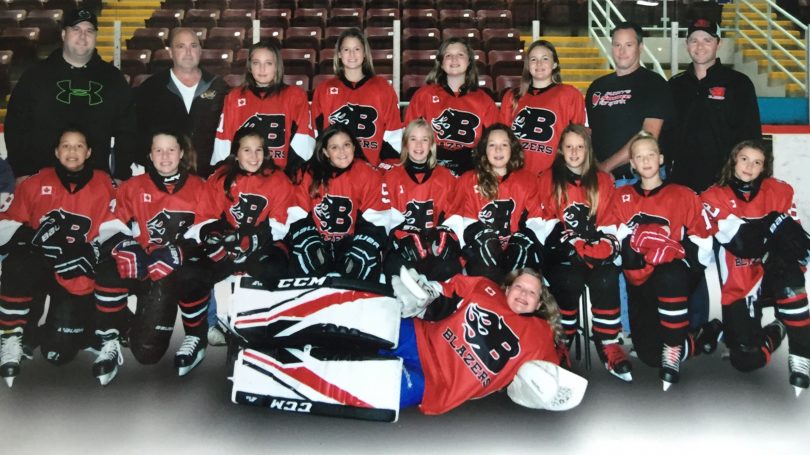 “With these girls only being 12 and 13 years old, their parents also spent 120 times at the rink. Eating, living and breathing for 7 months at an arena somewhere in Southwestern Ontario just becomes the norm. All parents woke up the day after the last game and thought “So, what are we supposed to do now with our time?” stunned by the fact that they actually have nowhere to go, everyday, for a few months.

It was strong season for the B.A.D. Blazers Peewee B hockey team in 2018-19, as the girls developed their skills throughout the season, posted a strong record, and overcame several hurdles along the way.

Despite the fact that many of the Peewee B Blazers were playing together for the first time last season, the team instantly gelled. With half the team being minor Peewee and the other half major Peewee, the Blazers had a remarkable season and faced some really tough competition and seasoned teams.

The B.A.D. Blazers is a girl’s hockey organization that runs conglomerate teams from areas around Belmont, Aylmer and Dorchester and plays under the Ontario Women’s Hockey Association (OWHA). Because female competitive hockey players can try out and play for any OWHA organization (unlike the OMHA), some girls can end up playing B.A.D. from areas much further away.

Travelling was a major component of the team’s 2018-19 season, with places like Windsor and Sarnia being within the competitive loop. As expected in hockey, there were a couple of concussions and a few torn ligaments during the year, but all players eventually returned to the ice prior to the end of the season.

B.A.D. took second place in a tournament in Waterloo after facing a tier 2 team from the United States. That was one of three out-of-town tournaments the Peewee B Blazers played last season.

After over 120 ice times of games and practices, the team ended the season over .500 with a record of 23-19-5. When it was all said and done, the 12 and 13-year-old girls, and their parents, had spent seven months eating, living and breathing hockey at an arena somewhere in southwestern Ontario. It became the norm. So much so that parents must have woken up the day after the season ended thinking, ‘So, what are we supposed to do now with our time?’

Said the team’s head coach, Johnny Knelsen: “Coaching this team was a pleasure, and I really enjoyed getting to know this group of amazing girls. We were a dynamic, high-scoring team, and we’ve shown huge growth in game knowledge and playmaking skills over the past few years. For me, the greatest part of coaching is still watching the girls build friendships and grow as individuals – both on and off the ice. I think this is still the most important aspect of team sports. Go Blazers!”

By Naomi Reintjes for B.A.D. Blazers Hockey and photo by Shooters Sports Photography