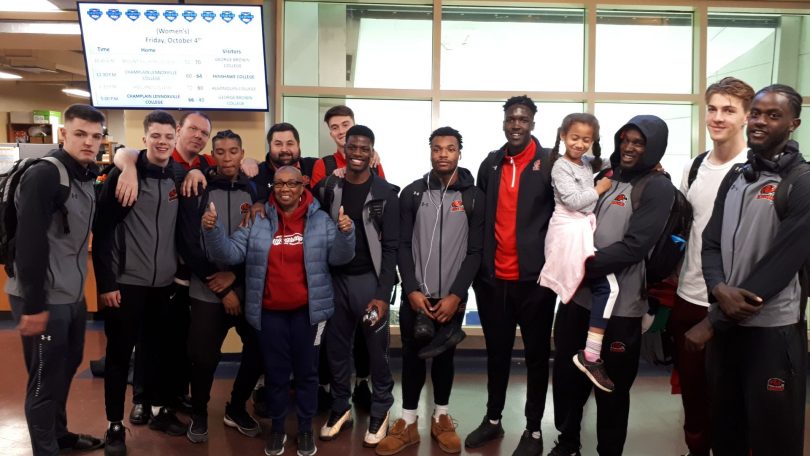 United Kutz and sports go hand-in-hand. The barbershop’s owner, Kwami Lambert, has had a passion for sports his whole life, and he’s also a proud supporter of local sports teams and organizations. He also employs athletes – including Nathanael Morris-Mckenzie, a member of the Fanshawe Falcons basketball team.

On the court, Nathanael, who has spent three seasons with the Falcons, is a speedy forward with a lot of athleticism. Off the court, he’s one of the guys down at United Kutz, where he’s been cutting hair for the last two years.

“I love working with the guys. It’s an entertaining place, and the job keeps you busy,” says Nathanael, who first began cutting his friends’ hair five or six years ago – primarily for his basketball teammates, Mohammed, Christopher and Dre. “Those guys helped me excel in my skills, doing whatever I wanted to their hair and designs and everything.”

Since then, he’s gained more professional experience – thanks to the barbers at United Kutz, where he began work two years ago.

“They taught me even more to make me a better barber,” Nathanael says.

Away from the barbershop, he’s at school, studying Auto Body Repair Techniques. And, of course, playing basketball for the Falcons, who enjoyed an eight-game winning streak and went 9-2 during the first half of the college season, good for second place in the league. Just like in the barbershop, Nathanael is always looking to improve on the court.

“I think I need to work on my skillset and increase my basketball IQ,” the 6-foot-3 forward says. “My goals are to stick to what I can do and know my role. I think our team will go far this year. We play our hardest no matter who we’re playing against. Our goal is to always outwork our opponent.”

Nathanael is no stranger to hard work. And that goes for in the barbershop, too. And just like on the basketball court, his teammates at the shop are all working towards the same goal and supporting each other.

Says Nathanael: “I’m just thankful to Kwami for giving me the opportunity to work alongside him and his team.”