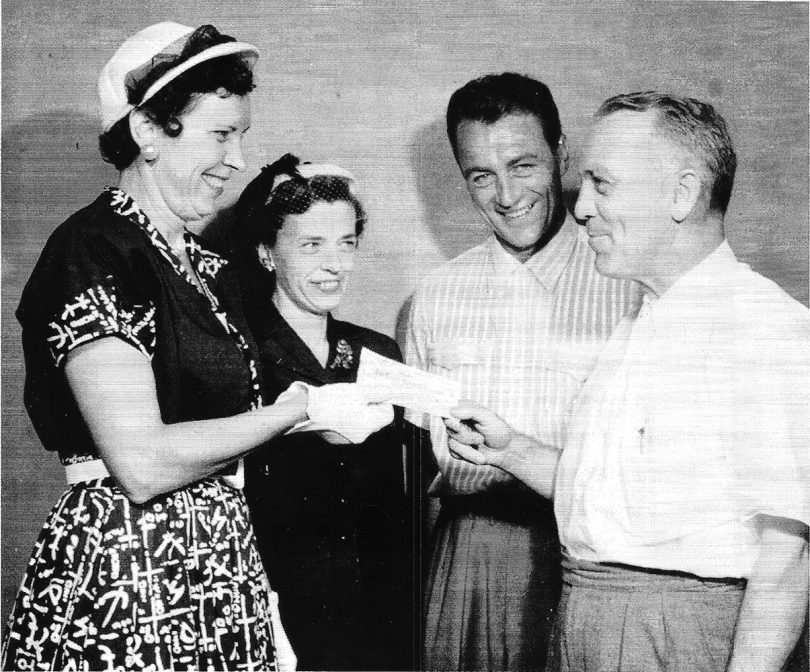 Beaverettes Aid Eager Beavers August 4 1955: The Eager Beverettes presented the Eager Beaver Baseball Association with a check for $854.33 to help meet expenses of the young ball players. Left to right: Mrs. George Cavanagh (treasurer of the Beaverettes), Mrs. Al Marshall (president), Frank Colman (president of EBBA) and Alex Park (treasurer of EBBA). The money was raised through a draw.

The Eager Beaver Baseball Association (EBBA) is London’s longest running youth sports program, due in no small part to the hard work of its dedicated volunteers – both past and present. A collaboration between several dedicated baseball players and fans (among them, Frank Colman, Gordon Berryhill, George ‘Mooney’ Gibson and Al Marshall) gave EBBA a grand start in 1955 with 12 teams. Sixty-five seasons later, the league is still providing a quality baseball program for over 400 players aged 4 to 22 years old.

In an unending spirit of giving, past volunteers of EBBA continue to provide support to the organization. Al and Rita Marshall were the league’s first secretary and first president, respectively, of the Beaverettes Women’s Auxiliary. Their son, Richard Marshall, continues to support the league with team sponsorships in his parents’ memory. Meanwhile, Frank Colman Jr. and his children and grandchildren continue to attend the annual Colman Day celebrations at Labatt Park and throw out the ceremonial first pitch to start the all-star games. And Ed Berryhill, the nephew of Gordon Berryhill, also attends the Colman Day festivities and hands out the annual Berryhill Volunteer of the Year award.

Current league president Rick Peters played for EBBA as a child. He says that the league’s success has always been attributed to the drive and determination of its volunteers – and this year is no exception. However, more volunteers are always needed and welcome!

The Colman Day all-star games are scheduled for July 13 at Labatt Park. T-ball players will start the day at 9am, and games will continue until 10pm. Members of the Colman, Marshall and Berryhill families plan to be present again this year. For more information, or to volunteer, please visit the league’s website at EBBA.ca.