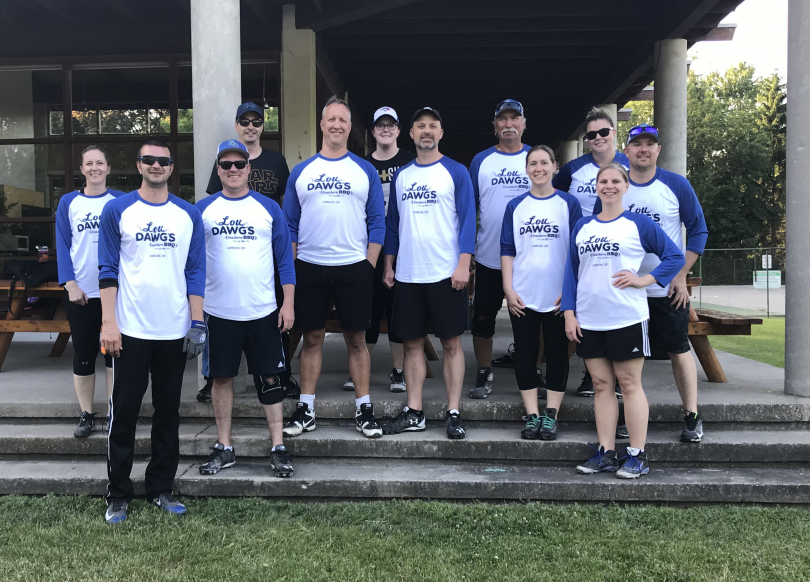 Lou Dawg’s Southern BBQ opened its first location in Toronto in 2009. That very first summer, we put together a Coed softball team. The next year, we had three teams. The following year, we had nine! Some of those teams include ‘The Lou Dawg’s Pulled Porkers,’ ‘Po Boys,’ ‘Mighty Loutines,’ ‘UnderDawgs,’ ‘Big Dawgs,’ ‘Meat Sliders,’ ‘Dirt Dawgs,’ and ‘Dawg the Bounty Hunters,’ Creative team names, to be sure!

As we opened in Hamilton in 2016, we added another team with our friends at Collective Arts Brewery. In Uptown Waterloo, meanwhile, we added a men’s team, and in London we now have three registered Coed teams – and counting! Current teams include ‘The Lou Dawgs Smokin Bases,’ Smokin’ Barrels,’ and a team of London first responders (emergency department nurses, technicians, paramedics, and residents) called ‘Quit Your Pitchin!’

In other words, Coed softball has been a much a part of the Lou Dawg’s Story as our delicious BBQ and awesome live music! Coed softball builds community and provides the athletes and staff the opportunity to form lasting friendships over the years.

We will definitely be scheduling an annual multi-city Lou Dawg’s Softball Tournament for years to come. As we grow, so will this softball tournament!